Brace yourself, because the Syfy original movie/pop culture sensation Sharknado, starring Tara Reid and Ian Ziering, is headed to a big screen near you. Regal Cinemas is hosting almost 200 midnight screenings across the country of the made-for-TV movie on Aug. 2. There's even more reason to get to know the phenomena, since Syfy also announced that there will be a Sharknado sequel. But what's a sharknado, you ask? Keep reading to get a primer on the TV movie, see the best GIFs from the ridiculous footage, and read the most hilarious celebrity reactions. 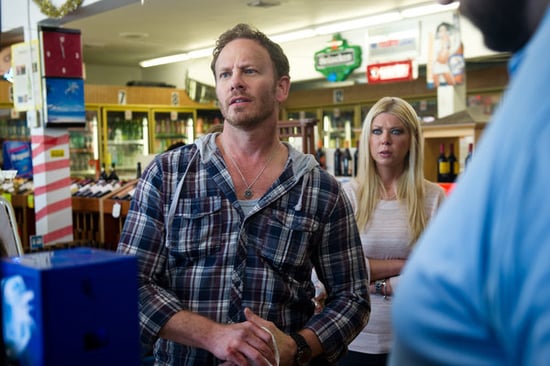 The Premise
Basically, a bunch of giant super tornadoes form in the Pacific Ocean, just outside of LA. These super tornadoes suck up a ton of sharks — because we all know that thousands of sharks hang out by the shore, right? — and carry them to land. The result? Pure and total chaos.

Yes, you read that correctly. Sharks in the sky. Just, you know, hanging out.

See the rest of our favorite GIFs plus celebrity reactions when you read on!

If you think about it, the only thing more terrifying than a shark attack in the ocean is a shark attack on dry land. That doesn't stop this guy from letting loose on a shark with a bar stool.

Also, someone saws a shark in half.

But none of that really compares to diving into a shark and sawing your way out.

So, yes. That's Sharknado in a nutshell.

The Reactions
You'd think that's where the fun ends, but the best part is actually everyone else's response to the film. The film blew up Twitter after its premiere, and we pulled the best tweets from the mix!


B.J. Novak is afraid of being "the boy who cried Sharknado":

Holy shit, guys. Turn on @CNN. Obama, just now: "We must, as a nation, will our organs to shut down. Sharknado!"

Josh Gad believes that Steven Spielberg is a good person.

If Spielberg could go back in time and stop Jaws from happening to prevent 2013's #SharkNado, I believe he would.

Um, Elizabeth Banks and Olivia Wilde both called dibs on the sequel?!

@ElizabethBanks Banks, this is our chance to play Siamese twins: two heads, one magnificent shark tail. Emmys all around. #SharknadoTwo

Even Mia Farrow got in on the action.

Who's excited for Sharknado 2?!

Barbie Ferreira
Did You Catch That Game of Thrones Easter Egg on Euphoria?
by Monica Sisavat 5 hours ago