NBC's comedy Whitney initially revolved around its main characters being happily unmarried, but when I chatted with series creator and star Whitney Cummings, she spilled that we may be seeing Whitney and Alex getting engaged. She also talked about the recent breakup of Lily and Neal and how that will affect Whitney's attitude, along with some funny insights into her working relationship with her onscreen boyfriend, played by the very wise Chris D'Elia. 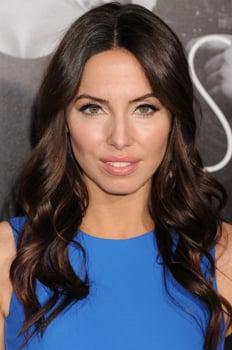 BuzzSugar: Neal and Lily's breakup surprised me; was it always planned to break them up?
Whitney Cummings: Well, I think I always planned for them to break up, and I think throughout the season we saw them very gradually and incrementally showing their differences and incompatibilities. We saw that Lily didn't get along with Neal's mother because Neal's mother wanted him to date an Indian girl, so she tried to do all these things where she was Indian. They ended up sort of making up at the end of the episode, but in the "Game Night" episode they were playing games and they weren't in sync, and weren't on the same wavelength and arguing, so they've been sort of always having some discourse throughout the season. We've tried to lay it in very subtly, and then when they started dealing with their wedding arrangements, that's when it really hit the fan — when he asked about getting a prenup. To me, I always envisioned this because I have seen so many cases where I see a perfectly happy couple who are together three, four years, don't fight, [but] as soon as they get engaged, all these problems start, you know? It's planning the wedding, and where are we going to get married, and who are the guests, and how much are we going to spend? And then this perfectly happy couple is fighting constantly, and that always was kind of sad to me. So that's what I always wanted to do with them [Lily and Neal].

Buzz: So will that give Whitney more fuel for her antimarriage stance?
WC: In fact, the show has a really great, fulfilling arc to it this year. In the pilot you sort of see me saying "marriage is not for me, I come from a lot of divorce, I do not want to get married, that's when the problems start." And in the finale, you will see me at a complete 180 degrees from that. Because throughout the series, we've shown me incrementally grow and get more into the idea of marriage and by the finale . . . you'll have to see, won't you?

Buzz: I saw a spoilery picture where it looks like Alex is proposing . . .
WC: [Joking] Or did he fall? Maybe I was knighting him? Maybe we were doing an African dance class, I don't know. But yes, Alex does propose to me. It's a two-part finale, so he proposes, and then in the finale . . . you'll just have to see what happens.

To find out whether Whitney says yes to Alex, just keep reading.

Buzz: Will we find out what Whitney says?
WC: No, we find out what Whitney says at the time he proposes. I don't like cliffhangers. Well, he comes home drunk the first time — he goes out to a strip club with a bunch of his friends from college, and he comes home hammered out of his mind. I mean, in my personal life, I've dated so many alcoholics and drug addicts that every romantic moment has been a guy on a drug or drunk, so that to me hit very home. So he comes home drunk and proposes to me drunk, in a hilarious way, so I don't know whether to take him seriously or not. And then I ultimately decide I'm going to say yes, but then he lied to me about something, so that's kind of a setback. But it's a really great episode; it's one of my favorites.

Buzz: Sometimes when Chris delivers a line, you look like you're genuinely laughing so hard.
WC: Dying. Dying. He's doing something and you cut to me, and I'm always laughing so hard. We have the best time together. We crack each other up. A lot of times, we'll improvise stuff, and I hate to be laughing at my own jokes, but the material's pretty funny. We just have such a good time together; it's really horrible when we get into the editing room, we have to cut and cheat shots and take shots from different scenes to make it so that I look like I'm not cracking up the entire time.

Buzz: Is there a lot of Chris in Alex?
WC: There's a lot of Chris in Alex's character. A ton. I wrote it for him. I write for him to be madly in love with me, which might not be totally Chris, but yes, I always think about him: What would Chris do, what would Chris say. And he's such a brilliant physical comedian that we'll always think of things.

Buzz: Do you ever think that Whitney is too hard on Alex?
WC: I don't try to judge the character; I don't judge myself. I just think, how would I really react for the situation? For example, when we're at the coffee shop and he checks out a girl right in front of me, and then he lies to me about it, that was the episode where I give him the silent treatment. I think a lot of people were like, "oh you're being so hard on him." I was like, OK, well, it's not in a vacuum, you know, we all have our damage. We've all been in bad relationships and have baggage, and this is the person I'm going to spend the rest of my life with, so I'm not going to set a precedent where it's OK for him to lie to my face — or to check out girls in front of me, because that's disrespectful. So I think that a lot of women would relate to that point of view, and again, the character's not perfect by any means. None of us are. And I didn't want to make Whitney the ideal girl; I wanted to make her a real girl. With real flaws and problems, and a lot of times, yeah, I do go too far, or I am hyper sensitive, or too stubborn. But those are the qualities I have, and those are the qualities a lot of people have, and I didn't want to be apologetic about it. I just wanted it to be a portrait of what my relationship is like. But the good news is, we always have people around me commenting on me. Alex's character [is] constantly like, "you're crazy, you're insane, you're a maniac." So it's not like everyone around me just accepts it. It's supposed to be a portrait of someone who has a lot of damage and is trying to heal through this relationship.