Jesse Eisenberg stars as Eli, a musical genius who just wants to get into a piano program, in the dramatic comedy (or is it a comedic drama?) Why Stop Now. Interfering with his ability to pursue his scholastic goals is his alcoholic, drug-addicted mother, Penny, played by Melissa Leo. He's already used to taking care of his little sister, but now, on the day he's scheduled to audition for his spot in a music program, he must rally his mom to enter rehab. Of course, it's not as simple as it sounds, and the family gets tangled up in an adventure with Penny's outlandish drug dealer, Sprinkles (Tracy Morgan). 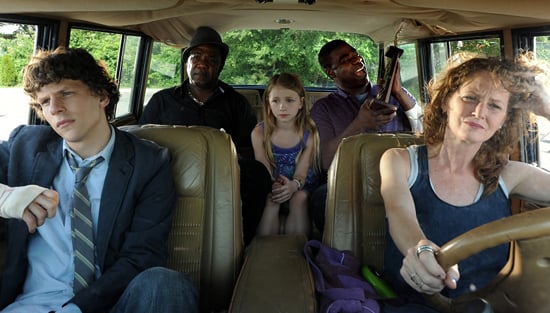 The premise of this movie makes it sound like a typical drama: kid has a gift, kid can't flourish with his dysfunctional surroundings, kid eventually escapes and makes it big (or not). That's also how the preview begins, before it takes a sharp right turn into wacky comedy territory. I'm a little concerned about the uneven tone, but the preview is also reminiscent of Little Miss Sunshine, which is a good thing. The movie opens in limited release on Aug. 17, but check out the trailer when you read more.