Hugh Jackman is one of Hollywood's most versatile actors, a fact he proves yet again in The Wolverine. This marks Jackman's sixth turn playing Logan/The Wolverine, but the last time audiences saw him onscreen was for Les Misérables — a movie that had him singing, not clawing. Maybe watching him as Jean Valjean gave me a renewed appreciation for Jackman as The Wolverine, or maybe it's just that Jackman is better than ever as the clawed mutant. The Wolverine finds Logan some time after the events of 2005's X-Men: The Last Stand. He's living as a recluse, hiding in the mountains and dreaming of his ex, Jean Grey (Famke Janssen). But it wouldn't be a good movie if he stayed in a cave the whole time, would it? And trust me, The Wolverine really is a good movie. 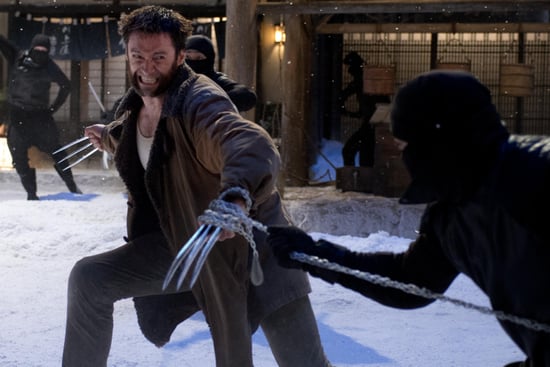 Logan is content in his misery and self-loathing, until Yukio (Rila Fukushima, whose fighting skills are something to marvel at), a young Japanese woman, shows up and tells him that her boss has requested Logan's presence. Her boss turns out to be Yashida (Hal Yamanouchi), an ailing king of Japanese technology, who Logan happened to save during WWII. She claims he just wants to say goodbye before he dies, but what Yashida really wants is something that would shake up the entire X-Men universe: he wants to make Logan mortal. It's a good hook, but the story in The Wolverine goes far beyond whether or not his "cure" for mutants works as it gradually becomes a twisty mystery. The evolving turns kept me on the edge of my seat, but the storytelling isn't the only impressive aspect of the film. Find out more when you keep reading.

Logan is initially hesitant to bring out the claws, but defense — and eventually, offense — becomes necessary. He springs into action to protect Yashida's daughter, Mariko (Tao Okamoto), from a dangerous gang, and it's exciting to see him slip back into Wolverine mode. He fights gang members, he battles on top of a bullet train moving 300 mph, he takes on an entire band of stealthy ninjas — it's awesome! And when Logan's ability to heal is put in jeapardy, there's a real feeling of danger in the mix.

The movie takes place almost entirely in Japan, and the combination of the landscapes with the 3D is exceptional. The Yashidas live in a scenic puzzle of a home, and there are city scenes that make you feel transported to the streets of Tokyo. The 3D is most impressive in the film's first sequence when Logan saves Yashida from a massive nuclear explosion. Not only does the technique complement the film, it really enhances it.

Knowledge of the prior X-Men films is a plus for viewers, but it's not a necessity, which is what I like about The Wolverine. Save for some crowd-pleasing cameos during an after-the-credits sequence, the movie doesn't rely on a ton of throwbacks to the X-Men mythology; it succeeds as a standalone action film, and a seriously sharp one to boot.

Movies
Who Plays Borat's Daughter, Tutar? We Finally Have an Answer
by Amanda Prahl 8 hours ago