Woody Allen's next film is no longer untitled! The film, which stars Emma Stone and Colin Firth and was shot in the South of France, is titled Magic in the Moonlight. The first official pictures have also been released, and they're very telling, since we didn't have too many details beyond the cast. Based on the garb of Stone, Marcia Gay Harden, and Colin Firth, it's clearly a period piece, though it's not clear whether the film is actually set in France. There's also a release date: July 26, 2014. 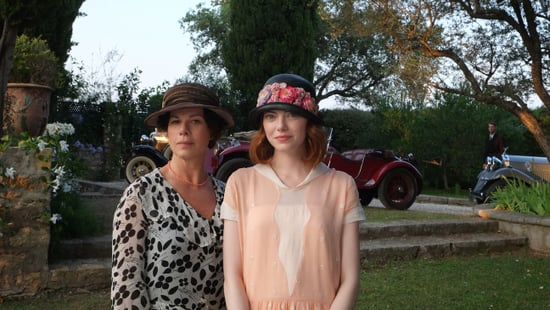 The name, possible French setting, and time period are all reminding me of Midnight in Paris, one of my favorite Allen films, so I can't wait for this or to find out more details. Check out the other picture, featuring a very dapper Firth, after the jump.

Jamie Lee Curtis
Lock Your Doors! Michael Myers Is Back in the Suspenseful Trailer For Halloween Kills
by Chanel Vargas 3 hours ago

Janel Parrish
Janel Parrish's Hallmark Film, Holly & Ivy, Will Give You All the Feels: "It Has So Much Heart"
by Kelsie Gibson 6 hours ago