Brad Pitt takes on a globe full of screeching, flailing undead creatures in World War Z, a film that's as excellent as is it terrifying. Pitt is a great dramatic actor, and it's fun to see him use those skills while also shooting zombies. He's mesmerizing here as Gerry Lane, a retired UN investigator. Gerry's chasing the source of a virus that is rapidly turning the world's population into flesh-eating zombies — and all the while, he's being chased by said relentless creatures. The country needs Gerry's expertise, and getting out of Pittsburgh with his wife (Mireille Enos) and two young daughters is just the beginning. He's got a long and intense journey in front of him battling not only the dead, but also the living, whose overwhelming fear has turned them into the worst kind of humans. 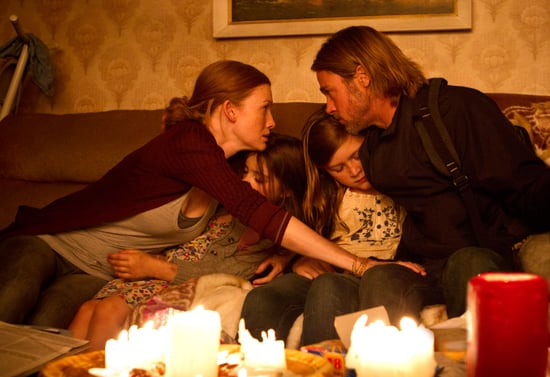 Though we don't get much time to see Pitt in pancake-making, stay-at-home-dad mode, it's endearing to see him play doting father to his two girls. Minutes into the film, the zombies have ascended with a vengeance, and suddenly Gerry goes into survival mode. It's a subtle change, but Pitt strikes a spot-on balance between scared citizen, protective father, and skilled detective. We never lose sight of his paternal side; even when he leaves his family in the care of a special forces ship to track down the virus's source, he checks in with his wife daily. Find out what other strengths I appreciated in the film after the jump.

The zombies are terrifying; there are zombies in packs; loner zombies; moaning, groaning zombies; leaping zombies; thrashing, climbing, screaming zombies. From the initial attack, World War Z establishes exactly how the virus spreads. It's pretty simple: you get bitten, you convulse, then you're reanimated with cloudy eyes and ashen, black-veined skin and you immediately begin searching for your first prey. One of the scariest aspects of the creatures is that they're never sated and they're never seen feasting for long. They bite and they move on because their primary concern isn't eating people; it's spreading the virus. It's an effective element because the characters — and you — never feel safe.

Just as the virus follows a pattern, the film eventually settles into one as well. As soon as Gerry sets off on his globe-trotting adventure (first stop: South Korea), the plot becomes formulaic: He travels to one exotic locale and gains a clue, but safety is fleeting as the zombies narrow in and Gerry has to escape. But despite my confidence that our hero would get out alive, my pulse was still pounding.

Though it does become repetitive, World War Z is smartly written and cleverly crafted. Refreshingly, the PG-13 film is also nearly bloodless; given that, the fact that the movie is so chilling is impressive. It's a triumphant feat, and one you shouldn't miss.

Movies
The Wickedly Magical Ending of Craft: Legacy Leaves a Possibility For More Sequels
by Mekishana Pierre 1 hour ago

The Craft
The Craft: Legacy Features a Cameo That Leaves Us With a Lot of Questions
by Mekishana Pierre 2 hours ago

Emma Roberts
Emma Roberts Has a Cute Outfit For Every. Dang. Holiday. in Her New Film Holidate
by Sarah Wasilak 4 hours ago

by Amanda Prahl 25 minutes ago