When I visited the Louisiana set of The Lucky One, which is out April 20, I had a chance to chat with star Zac Efron about the Nicholas Sparks adaptation with a few other reporters. Efron plays Logan, who falls for a girl (Taylor Schilling) he finds after first seeing her in a photo, so when we sat down with the actor, he talked about being able to relate to that kind of romantic gesture. His character is also a former Marine, prompting Efron to put on weight and a slew of tattoos to look the part. Read on to see what Efron had to say about the fake tattoos, why meeting real Marines was so awkward for him, and why he was so impressed with his leading lady. 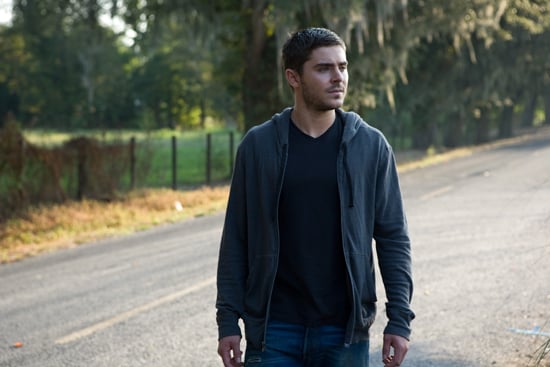 Logan walks across the country to find a woman; would you ever do something like that?
ZE: I guess this is my chance to do it without actually having to do it. I like the idea of this guy, I wish I was like him. So I figured I wanted to play him.

What did you to do to prep to play a former Marine?
ZE: I found this channel on TV, the Military Channel. That's probably one of the coolest things that I stumbled upon. It was a total accident, I walked into my room, and it was a Navy SEAL, their boot camp, that they were going through. And it was really in depth, watching them go through just the most basic training. There was always a part of me deep down that thought, if it came down to it, I could pass. I could make it through basic training, I could do it. And after watching these things I realized there's no way I could do it . . . subject myself to that. They're a different caliber of man than me.

Find out what else Efron had to say about The Lucky One after the jump.

How did you get into the mindset of a Marine?
ZE: First thing we did was go to Camp Pendleton. I went with my friend Jim Beaver and Scott [Hicks, the director]. And when I went into meet some of these guys, the sergeants, I was blown away. I was taller than most of the guys, but they were just . . . thick. There was something about them. They had a definite presence. And here I am, you know, slouched over and you know, I just smile a lot. I'm always smiling. These guys were, you know . . . it was honestly one of the most awkward moments of my entire life. They know you're there to observe them, and it's sort of an awkward position to be in. But after about, I'd say two hours, the guys really opened up and started to talk more freely about what it's like.

What about the physical change?
ZE: Physically, I'd started eating a lot. Eating through walls. Eating, eating, that's all I did. I put on some weight that way, and as far as the training goes, just trying different techniques and methods. I was working with a guy who I met who trained Vanessa [Hudgens] during Sucker Punch. I met him and trained with him for a few weeks. It was so intense and so different. It was so much fun, pushing it to the next level, that I asked him to work with me on this, and he was so gung-ho about it. He's a Navy SEAL.

Did you enjoy the process of the physical change?
ZE: Yeah, it's fun. It's one of the only concrete things you can do to feel differently about a character. It's like, suddenly your clothes don't fit, and [I felt like] 'I do see myself coming into this character.' I didn't feel like a Marine; I didn't have the posture, I didn't have the presence. And that was one thing for me that I could do to really make that change.

What can you tell us about Logan's tattoos?
ZE: All the Marines we talked to, pretty much a lot of the Marines you see have tattoos. And when we talked to the guys at Pendleton, they all talked about — it was hilarious — all of them were like, 'Hey, what's your mistake tattoo?' And they all have various ones. One of the guys was showing me his tattoos, and one guy had a sick scorpion going up his arm. They all had cool tattoos, on their forearms and stuff. One of the guys had a barbed wire around it, and I was like, 'What's that one for?' And he goes, 'This one's real special. That's my mistake tattoo. That's the one you get when you get out of basic training and you're real gung-ho.' I was laughing so hard, I was like, dude, we gotta have a mistake tattoo [in the movie].

Would you get a tattoo yourself?
ZE: Yeah, maybe. My problem with tattoos is I can't think of anything with enough significance in my life yet to put it on for good. I like the idea of tattoos; I wish I was a guy who could just go get one.

How is it acting with Taylor, who's lesser known than you?
ZE: She came in and was so professional, and just so good. It was really interesting to watch. I remember reading opposite Taylor, and I had read lines once or twice, and we came in, and it was her test, and she was much more honed in and more focused. I just remember she was doing so many cool, subtle things, that I was just fascinated with her, and I was reading lines. So I was like, I already love her; I don't know how anyone else couldn't. It made sense; she totally deserved to get this part. I was blown away with her.

Were you a fan of Nicholas Sparks?
ZE: I really like The Notebook. He's a phenomenal writer. I read the book, and I really liked it. I think his books are perceived to be kind of one thing, and I wasn't necessarily drawn to that genre. I felt that I didn't want to be, for some reason. And when I read The Lucky One I was just blown away. I couldn't put it down. It's really neat. He's a great writer and he goes into everybody's heads. It was a bit scary meeting him, because I wondered what he was thinking about the whole time. He's so in tune with the smallest things and his observations. I really enjoy his style. I think he writes great characters.

How is it working so close to New Orleans?
Zac Efron: It's great. If you have a moment off, there's a lot of great stuff to go see. There's a lot of history here. Everything in the French Quarter is really fun, very cool, I've been out there a few times. I think the food here is real special; all the restaurants are amazing. The hardest part about it is the mosquitoes, though, [because] we're out in the swamps and stuff, and I just get eaten alive. And the alligators are pretty cool.

How hard is it picking projects post High School Musical?
ZE: I'm still learning as I go. Every project's different, it's kind of just where you are mentally, at any given moment. Lately I've been looking to be challenged. I feel like because I'm not in college, I sort of jumped into the big leagues quickly, but I really wanted to learn as much as I could from directors. That's what I've been focusing on, [with] guys like Scott. It's worked, I feel a lot more aware so I'm learning a lot. Then there's a side of me that just wants to do things that are fun, and that's where I was for High School Musical, 17 Again. You have to do one of those every once in a while as well. It doesn't get any easier. It's hard work.