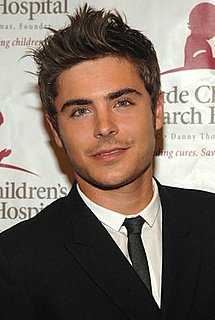 I hope you're not tiring of the Hollywood juggernaut that is Zac Efron, because the busy young actor has just signed up for two new projects, and this time, he's going for comedy.

First, he's adding his voice to the Robot Chicken special Robot Chicken: Star Wars Episode III as Anakin Skywalker. Meanwhile, his newly minted production company, Ninjas Runnin' Wild (which is also producing his other upcoming projects, like Snabba Cash and Fire), will take on a workplace comedy as a starring vehicle for Efron.

As part of his High School Musical graduation, it looks like Efron is making sure he's not tied up in one genre. We've already seen him show the funny in 17 Again, and I think I prefer to see him as a comedian than weepy teen heartthrob — I'm looking at you, Charlie St. Cloud.

HBO
Could Jonathan Terrorize More in The Undoing Season 2? Novelist Jean Hanff Korelitz Thinks So
by Kristin Harris 1 hour ago

HBO
FYI: The Novelist Behind The Undoing Had Her Eye on Sylvia Steineitz, Too
by Kristin Harris 1 hour ago

The Voice
This Voice Contestant Made an *NSYNC Hit 100 Times Edgier, and I'm in Awe
by Kelsie Gibson 2 hours ago

by Jessica Harrington 4 minutes ago