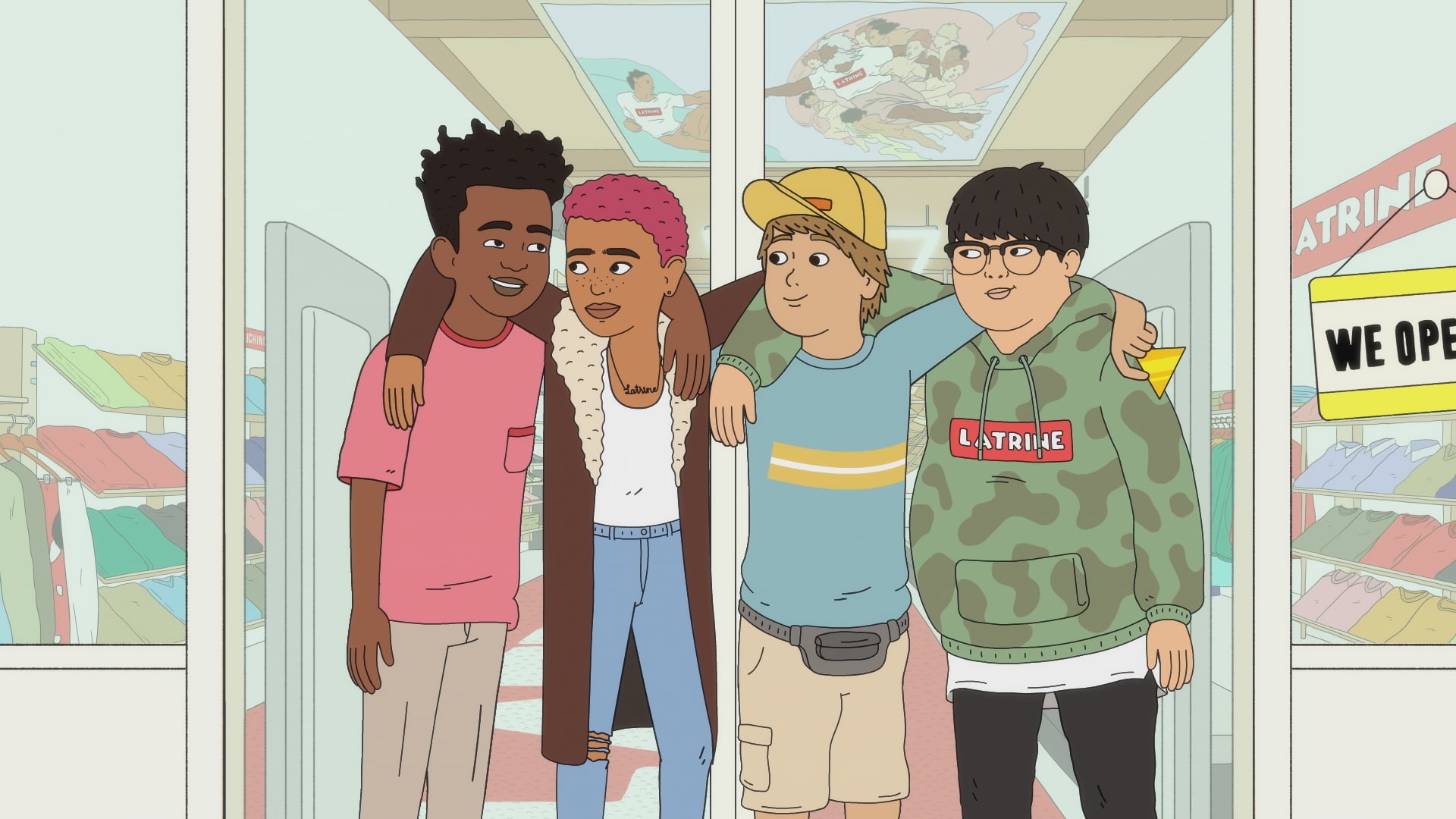 Amazon's new Prime Video original Fairfax, premiering on Oct. 29, delves into the lives of four middle-schoolers in Los Angeles obsessed with one thing: clout. Truman (Jaboukie Young-White) is that friend making sure his group are at the top of their game whether it's rebranding innocent Dale (Skyler Gisondo) on Instagram, scheming with Benny (Peter Kim) to get coveted merch from Latrine, or exploring woke concepts with Derica (Kiersey Clemons), but like most middle school experiences, some of their missions to be popular are quite cringey.

While speaking to POPSUGAR, Young-White said he's pretty similar to his character and "super into streetwear and Hypebeast culture," so bringing him to life on Fairfax was fairly easy. Gisondo expressed similar sentiments, saying he was so "unironically" similar to his character that writers ended up pulling inspiration from his Instagram to use in the series, leading him to question, "Am I Dale?" Kim and Clemons, however, are nothing like their characters in real life. "I'm 10 years older than the rest of the cast. I have the lowest amount of followers. I'm not even verified on Instagram. You know what I mean?" Kim joked. Clemons added that her scope of the world as a teen was smaller than that of Derica, who is "an influential person" in "the best way."

Before you get secondhand embarrassment watching Truman, Dale, Benny, and Derica on Fairfax, POPSUGAR spoke to the cast about their middle school days and clout-chasing moments, which mostly involve Facebook. Read ahead to see what they had to say.

POPSUGAR: What is the cringiest thing you did for clout when you were a teen?
Jaboukie Young-White: Before Twitter, before Instagram, before anything, I used to post jokes on my Facebook status. I was 14, 15, but at school, I used to be like, "Hey, I just posted a joke. You should like it. I posted a joke on Facebook. Go like my joke on Facebook." I still remember there was a time where I was teased for being extremely online and now it's kind of de facto if you're trying to get clout. You can't get clout not being extremely online.

Skyler Gisondo: I remember when I first got Facebook, I think I was like 13. Early Facebook days, profile pictures were a big deal. [I] would have a buddy come over and we'd do like a little iPhoto shoot with different effects and then throw it up. I did like a back-to-back one one time and I just thought, "I'm going to kill them with this one. People are going to just love this."

Kiersey Clemons: It was probably making myself look like I was doing something that I wasn't . . . I saw something on the internet once and it was this person who posted that they made it look like they were skydiving or something by jumping on a trampoline. They looked back at the photos and they did this when they were like 12 and they were like, "Can you guys believe I did this? Like I got away with this." I feel like I did that with stuff like I'd pose in front of a tree and be, "[I'm] in Hawaii."

Peter Kim: I went to high school when the 14.4K modem was up and running, so I didn't deal with a lot of digital clout, but I did some cringey-ass sh*t when I was in high school. I went to high school with 42 percent Asians in this school in the Bronx, this really nerdy school in the Bronx, and all the Asian kids back then had long bangs. It was a very K-pop mood. So, I grew my bangs all the way out to [my chin], bleached them, and shaved everything else. I looked insane, but I thought I was the coolest kid ever.

PS: What is one thing you would tell your middle school self today?
JYW: Don't cut your rat-tail. Peter's hair thing reminded me I used to have a rat-tail until I was 12 and it was long. It was 15 inches, maybe. Listen, I should've sold it. I had bundles in the back of my head. I had a lot of hair, but when I was getting ready to go to high school, I was like, "I got to switch it up. I got to rebrand." So, I decided to cut it off. But recently, I've been like, "I miss the rat-tail." I kind of want to bring it back.

SG: Your whole childhood is telling you to be yourself and it's grown so cliché, but I think it's said for a reason. I look back now and there's a tendency to feel like everyone's looking at you or everyone's thinking about something you said or did when in reality no one is. Everyone's only really thinking about themselves and what they got going on. Just do your thing.

PK: One time, I was trying to be super grunge and I bought a chain wallet and didn't wash my hair and wore black lipstick for two weeks and no one bought it. No one was buying it. Even the grunge kids were like, "Stop." So, I would say just cut out trying so hard.

PS: Do you think you could survive middle school today?
JYW: I don't think I would trade being able to go to middle school in a time that when you went home, you were not at school anymore. Now, it's like you go home and you're on social media. Everybody from school is there.

SG: I think kids have a lot to navigate today and just the pressures that come with social media. I cannot imagine being as tapped in as I am now. The constant seeing everybody's highlight reel and the FOMO, it's difficult.

PK: I think I would ask to be homeschooled.