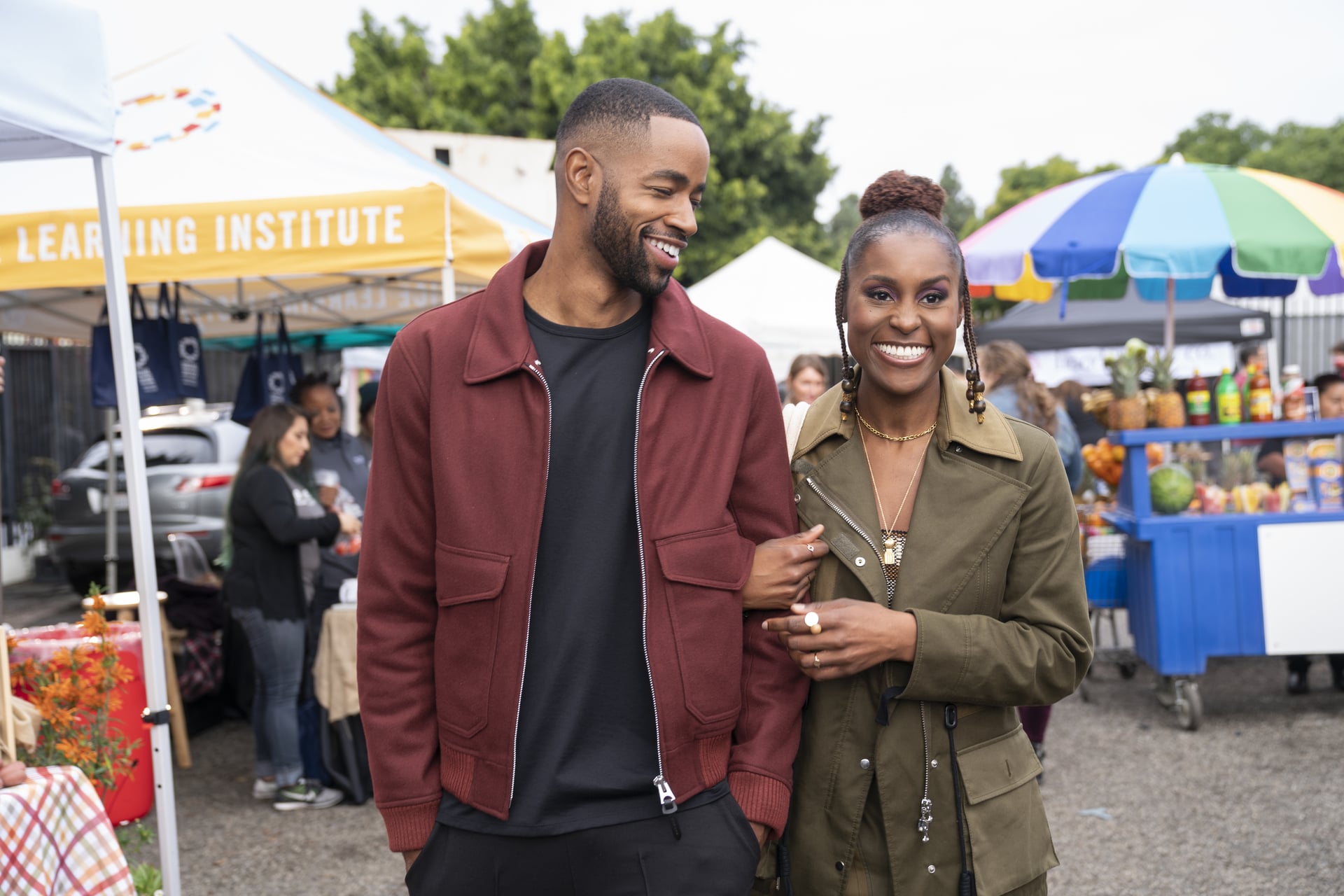 Insecure's season five premiere went out with a bang. The episode, which premiered on Sunday, follows Issa Dee (Issa Rae), Molly (Yvonne Orji), Kelli (Natasha Rothwell), Tiffany (Amanda Seales) and Tiffany's husband Derek (Wade Allain-Marcus) as they take a nostalgic trip back to Stanford University for their 10-year reunion. While the characters look back, Issa ultimately decides that another thing better left in the past is her on-and-off again relationship with Lawrence (Jay Ellis) and I respect that — especially given that Condola (Christina Elmore) is pregnant with his baby.

However, what I don't respect is Issa breaking things off with Lawrence immediately after he drove through LA traffic to pick her up at one of the country's busiest airports thinking they were still an item. Not to mention, they also kissed. Once they arrived to her apartment, Lawrence asked Issa, "Should we?" assuming they'd be going into her place together. "Um, Lawrence I had a chance to think, and . . . " she said before he cut her off to say, "Yeah. Yeah, I know." I support the breakup (and it wasn't surprising), but instead, Issa should've gotten an Uber and broken up with him when she got home, and clearly, I'm not the only one who feels this way as evidenced by the tweets below.

Issa dumped Lawrence after he picked her up from the airport. Cold world. #InsecureHBO

Issa had mans scoop her from the airport, kissed him, and then clipped the relationship. What album Lawrence play on the ride back?

Grand opening. Grand closing. That ride from the airport had issa really putting a lot of things in perspective. #LawrenceHive how y’all holdin up? 👀 #InsecureHBO

Issa still trash. Knew she wanted to break up with Lawrence but still had him pick her up from airport. #InsecureHBO

Meanwhile, other people are here for the fact that Issa got a ride from Lawrence before getting to business.

"Listen…I don't blame Issa for breaking up with Lawrence after he picked her up from the airport. Getting rides to and from the airport is always a hassle so she did what needed to be done! #InsecureHBO," one fan tweeted.

Not Issa waiting until she got a ride from the airport before breaking the news to Lawrence. I get it tho, Uber high af these days. #InsecureHBO

"Issa came out the airport with the Squid Game fit on and the game was break up with your man but get a ride home first," another person tweeted, referring to her green tracksuit.

In an interview with Variety, Rae revealed that Issa's breakup was strategically placed at the end of the episode. "We wanted to remind people about what the most important relationship in the show is — and that was like getting back to Issa and Molly's relationship. It was important to me that that be addressed first and that we focus on that relationship story-wise and use that as a way to also inform where Issa's headspace was as it relates to this situation that happened with Lawrence."

Eric Dane
Nate's Dad's DVD Is Missing on Euphoria — Who Took It?
by Toria Clarke 15 hours ago

Identity
Why Do Latinx Shows Keep Getting Canceled?
by Johanna Ferreira 16 hours ago

ABC
Will the Queens Make Another Comeback For Season 2?
by Njera Perkins 18 hours ago