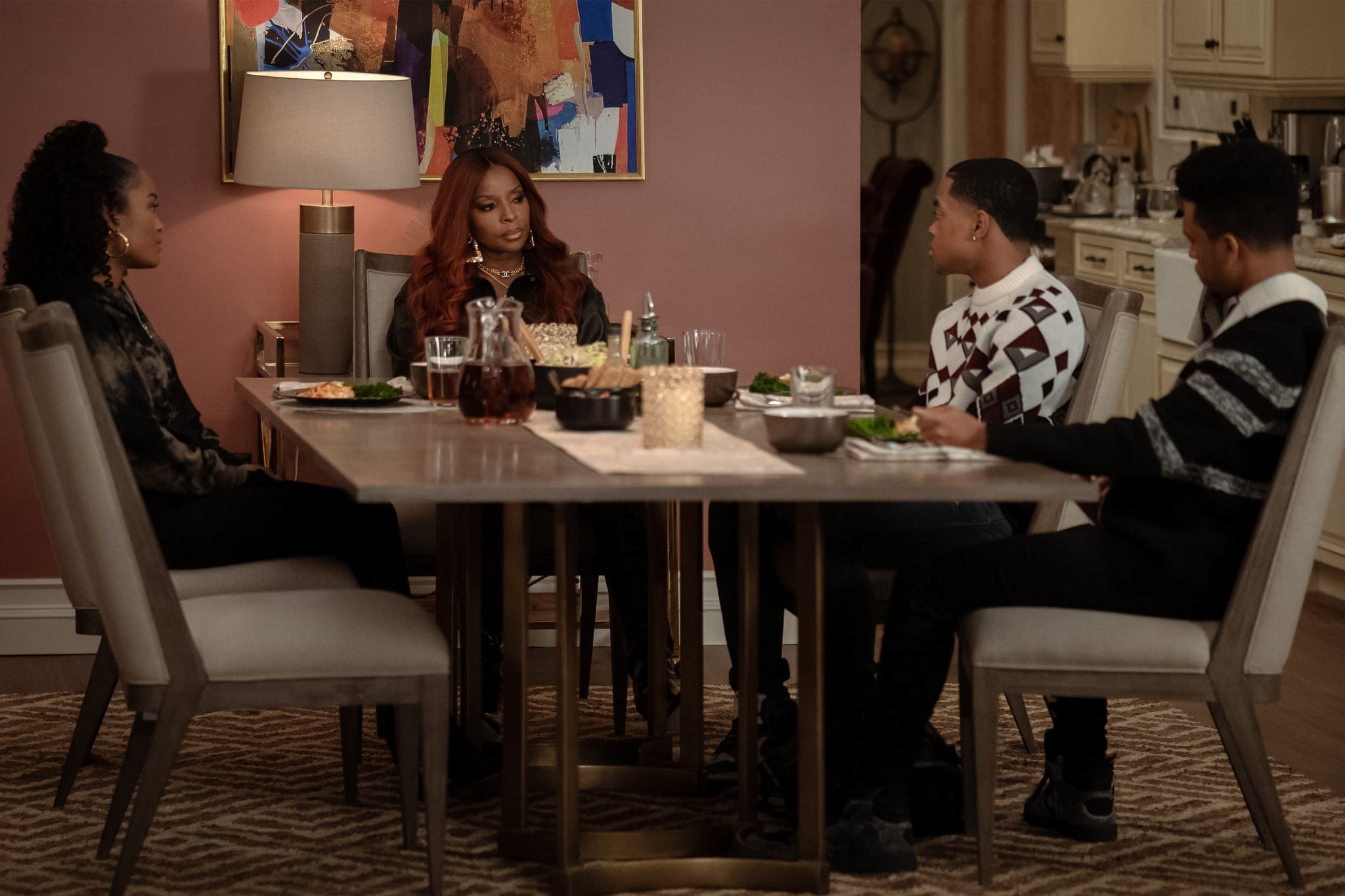 The theme of family permeates the entire Power universe, but in Power Book II: Ghost, the concept of home takes shape in new ways. Family and loyalty drive every character’s urge to protect the ones they love most. And in season two of the spinoff series, these values push everyone to their limits.

“A lot of people are making the ultimate sacrifices,” creator Courtney Kemp told POPSUGAR. “There are some people who are going to push themselves into areas that they never would've expected. Some pretty intense secrets are revealed and there's some physical fights that I'm looking forward to you all seeing.

Season two picks up with the murder of Professor Jabari Reynolds (Justin McManus) at the hands of Tariq St. Patrick (Michael Rainey Jr.). We already see how the remaining characters become entangled in the aftermath within the first two episodes. Tariq is hellbent on keeping his secret under wraps now that the murder has quickly become a high-profile case at Stansfield University. But without the protection of his mother, Tasha St. Patrick (Naturi Naughton) — who’s been whisked off to witness protection after her murder trial — he’s left on his own to fend for himself and the remainder of his family. “He’s forced to think smarter and think for not only himself, but for his sister, because he's got to stay alive to take care of [her] and his grandmother,” Rainey Jr. said. “So he doesn't have anyone to turn to in terms of getting input on what he should or shouldn't do. So he has to do what he thinks is right, and then he has to deal with the consequences — whether the choice that he made is right or wrong.”

Throughout the series, Tariq has been forced to mature in ways he never expected due to the absence of his parents. In season two, he carries even more responsibility as he struggles to juggle family, education, and street life. “I don't want to give any spoilers, but definitely we see Tariq flirt with being the person responsible, being head of household, in a way for his family [and] the remaining St. Patricks,” Kemp said. “In terms of his characteristics, he definitely rises to the occasion just like Ghost (Omari Hardwick) and Tasha always did.” Now that he’s unable to rely on his parents, Tariq turns toward other people in his life as surrogates: including his best friend, Brayden Weston (Gianni Paolo), and the Tejada clan — Monet (Mary J. Blige), Cane (Woody McClain), Zeke (Daniel Bellomy), Dru (Lovell Adams-Gray), and Diana (LaToya Tonodeo). 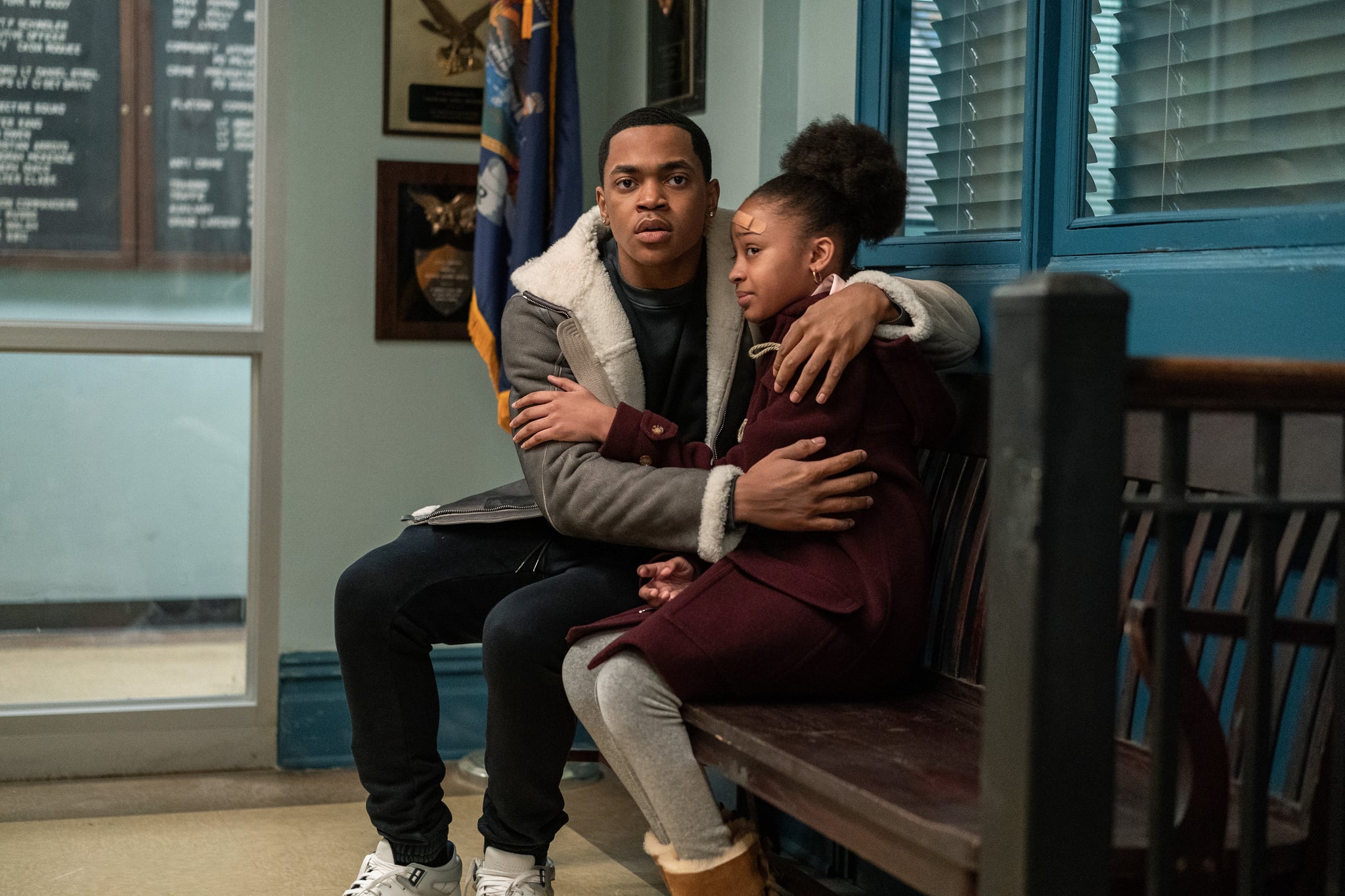 “I think he's looking for a place to belong,” Adams-Gray commented on Tariq’s need to lean on the Tejadas. “He's been displaced so much, he can't rely on his actual family. In many ways, I believe that Monet and the kids can relate to that. Trying to make moves and be a part of this new generation that is coming up, and so he sees a tribe with our family.” Tonodeo adds, “Even though the Tejadas sometimes can come off a little dysfunctional in how we move, I still feel like it's a sense of security for Tariq. Even with Monet in episode 10 of season one, when Tommy pulled the gun on Tariq at the end in the cemetery. Who was there to save him? Monet.”

"Even though the Tejadas sometimes can come off a little dysfunctional in how we move, I still feel like it's a sense of security for Tariq" — Lovell Adams-Gray

Monet Tejada, who welcomed Tariq as an extended part of her drug organization in the first season, also finds herself having to lean on him in some extreme instances. But she’s still doing whatever she can to protect her own by any means necessary. In season two, she’s visibly shaken up after Dru’s shooting. But instead of seeking out revenge, she’s more concerned with plotting her exit strategy — a plan that doesn’t seem to include Tariq or her husband Lorenzo Tejada (Berto Colon). According to Blige, family is of the utmost importance to Monet and motivates many —if not all— her decisions. “My mom was a single parent and she raised us by herself so I have all of that,” Blige said of how she molded Monet’s parenting instincts. “It was just us, no man, just her. We lived in this horrible environment where nothing but ‘Monets’ lived, and they actually became my friends and family to this day. So I leaned on all of that to give to this character, especially for the mother thing. I leaned on my experience with my mom.”

In season two, Monet delegates more responsibility to her children and seeks help where she can find it. She turns to her estranged son Cane — whose skewed definition of family and loyalty once again causes him to snake his way back into his mother’s good graces. Monet also finds solace in knowing that her daughter Diana, often the voice of reason for the Tejadas, can handle stepping up for the family if she’s unable to. “As far as Diana, she will definitely shed some of that innocence and maturity,” Tonodeo shared. “And with that maturity will come more of a voice, and she will start making decisions that she feels are best for the family.” 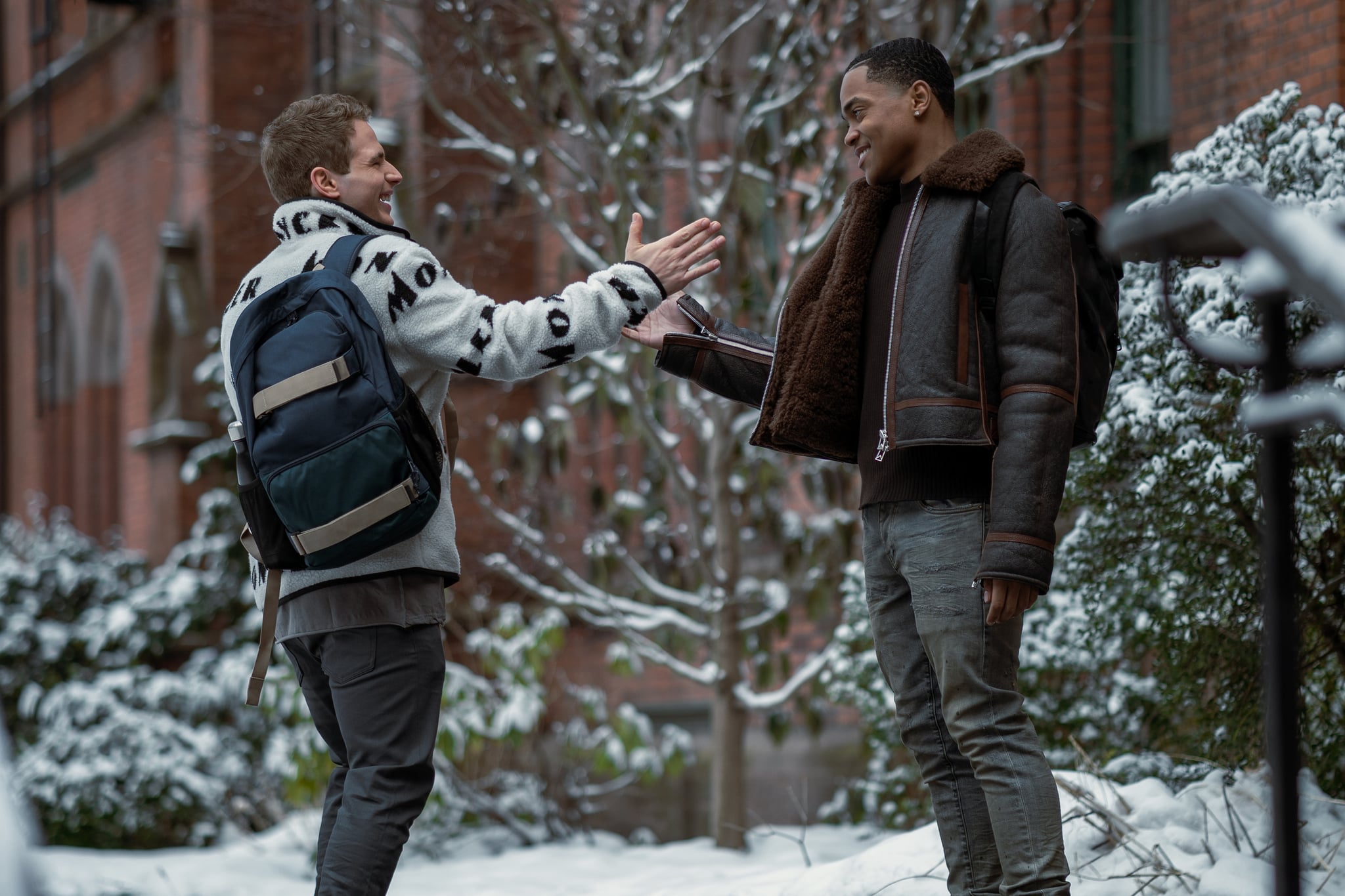 While the Tejadas sort through their own family drama, Tariq is comforted in knowing that he still has the support of his right-hand man Brayden. As the two form a closer bond, comparisons to a young Ghost St. Patrick and Tommy Egan are almost undeniable. “We do have a lot of similarities, but I think that dynamic is what people pull mostly from it,” Paolo remarked. “It's Ghost making decisions [and] Tariq making decisions. Brayden wanting to be in the game, and that's all he ever wanted, and same thing with Tommy. They just want to make money and have fun and live this life.” Rainey Jr. added, “I will also say people love the fact that Brayden is so loyal. He's super loyal to his teammate Tariq, [and] Tommy was super loyal and did everything for Ghost. So that's another thing that Brayden kind of owns in his character. He does the same thing.”

Although it’s safe to assume Brayden is stepping into the role of being Tariq’s “Tommy,” that’s where the similarities end. Unlike Tommy, his privileged family background makes him a legacy student at Stansfield. Naturally, season two delves more into Brayden’s backstory — we’ll see why he’s so drawn to the fast-paced drug life. “It's weird because I think that Brayden relates to Tariq more than he does his own family,” Paolo said. “He never really got along with his family or understood where he came from or why he came from them. His older brother, obviously we saw, he's a privileged a-hole and takes advantage of that. With Tariq, we kind of had similar upbringings but obviously very different. A Black man growing up in America is a lot different than a white man growing up in America.”

"It's weird because I think that Brayden relates to Tariq more than he does his own family." — Gianni Paolo

While their backgrounds make them seem like polar opposites, Tariq and Brayden both share the same desire — to be the ones in control of their fates. “The thing they have mostly in common is the fact that they want to be the reason that they're doing good,” Rainey Jr. said. “They want to make their [own] money, because like we saw in Power, Ghost would always say, ‘Oh, I did this for you,’ but Tariq never wanted any of that. He wants to make it for himself and the same thing with Brayden. His parents give him everything and he doesn't want that. He wants to make his own money [and] his own path. So that's the biggest thing they have in common. They both came from money, but they never wanted any of the money that they came from.”

Brotherhood brings Tariq and Brayden’s relationship full-circle, but familial bonds on the show don’t stop there. This season, Davis Maclean (Method Man) gets a chance to reconnect with his brother, Theo Rollins, who he attempts to free from prison. Method Man says this turn was born purely from a throwaway line in season one. “I attribute that to our brilliant showrunner, Courtney Kemp,” he said. “I was in interrogation with Tasha, and I mentioned to her that I have never asked anyone to lie — even my own brother. With one throwaway line, Courtney built a whole character. She, at the end of season one, more or less asked me how would I feel about Redman playing my brother — [I said] say less. Of course, I would love that. It takes a little time to get chemistry with somebody you've been on the road with for the past 20 years, so it was just like clockwork.” 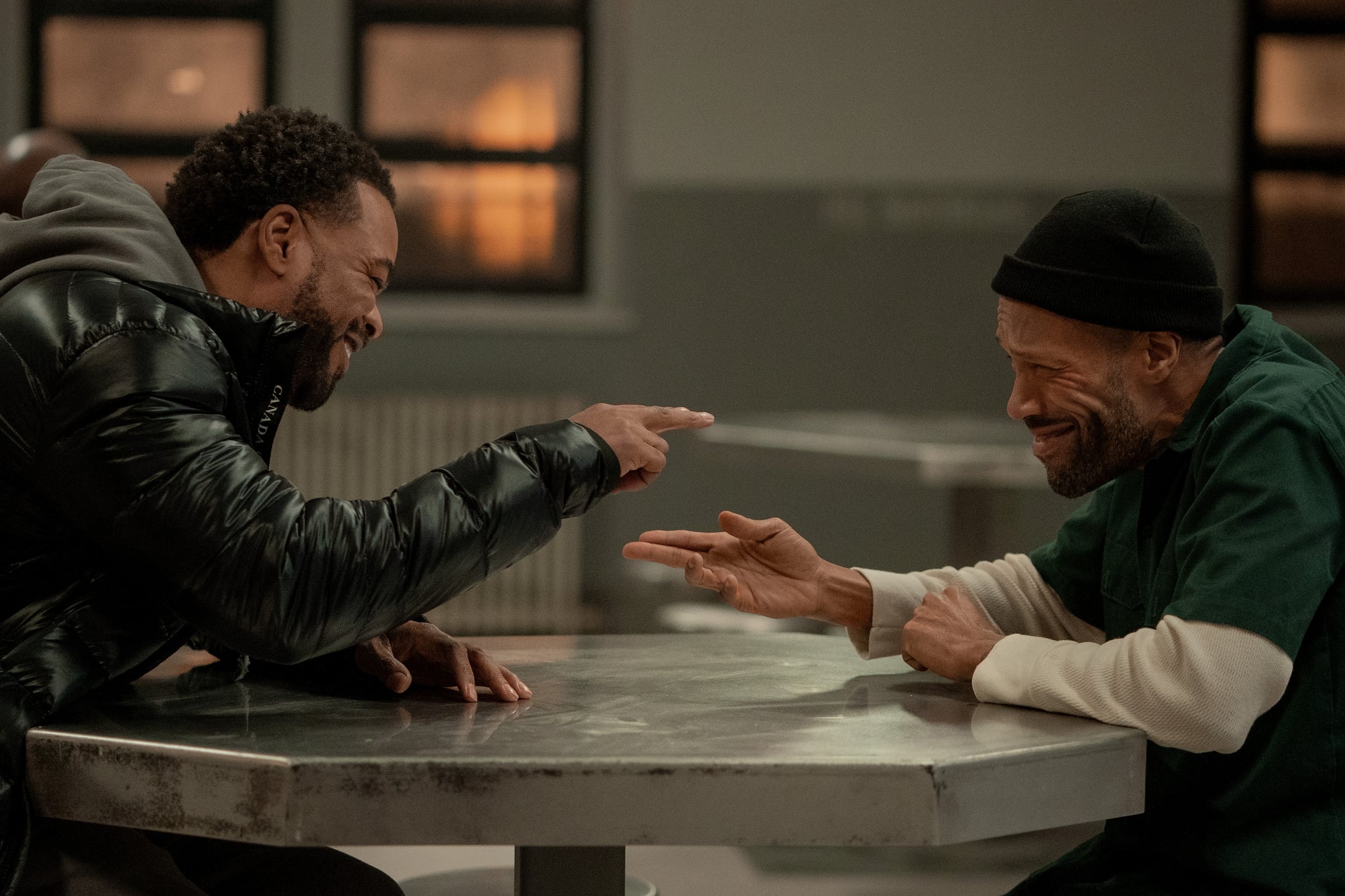 That organic family chemistry keeps viewers returning to Power Book II: Ghost. Beyond Method Man and Redman, real-life brothers Larenz and Lahmard Tate also reprise their roles as Councilman Rashad Tate and Officer Kamal Tate. “Family is a really important thing,” Larenz said. “I know a lot of times when people think about the Power universe, it's dealing with the underworld, drugs, and all that other stuff, but the core of it is about family. It really is about brotherhood, comradery, and those relationships that people seem to relate to, whether you have a good relationship in your family, or there's family turmoil.”

“I know a lot of times when people think about the Power universe, it's dealing with the underworld, drugs, and all that other stuff, but the core of it is about family.” — Larenz Tate

The family push and pull of Power Book II: Ghost draws from the original Power equation, and that also includes accurate representation. From being intentional about creating Afro-Latinx representation with the Tejadas to tying Tariq’s self-revelation about his own identity back to his father’s past, the Starz series always ensures that everything always comes back to family. “It's really clever what Courtney and those writers have been able to do and using family as that tool to make the stories relatable,” Larenz added. “When you bring that in, you see yourself up there and you go through that journey because you either can relate to the things that you're seeing or things you'd like to see in your own family.”

Ultimately, season two is going to be a major test for every character. Tariq will have to face the reality of his worst nightmare — becoming just like Ghost. “It's going to be tough for him,” Rainey said. “That's the biggest thing about him, accepting the fact that he's like his father. This season, he's kind of figuring himself out. He's trying to grow up fast and become the grown man that he's trying to be. But the main thing is that he has to accept who he is and you're going to see him struggle with that this season.”