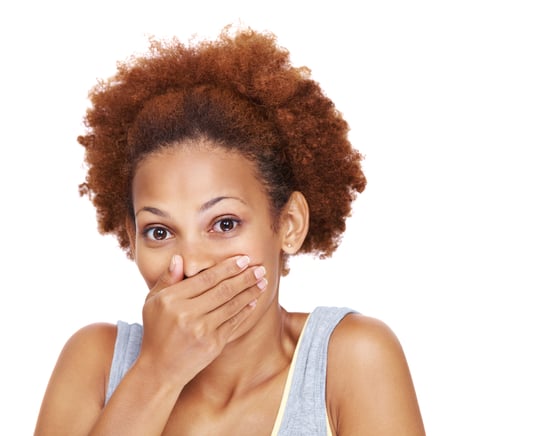 It's a familiar story to any parent: that time you heard yourself utter the most absurd warning to your children. The words or phrases you stumbled onto may have made sense in the moment, but you'd never have said them before becoming a mom!

Keep reading for some of the most surprising things Circle of Moms members have heard themselves say since becoming moms.

Mom Erin J. shares that when she said this it was all she could do to keep a straight face. It seems that pets spur some of the funniest, most absurd things we say to our kids. In Cindy M.’s house, she found herself saying, “Get the dog's bone out of your mouth,” possibly around the same time that Sharon G. was trying to explain to her daughter why the family's pet fish couldn’t take a bath with her.

Many moms find themselves saying things that their 12-year-old self would snicker at. Circle of Moms member Michelle M. got caught in one of these goofy word mash-ups when her 3-year-old was kicking around a ball indoors.

My hat’s off to Emma, the mom who heard herself say this one. Before I became a mother, I swore I would never let my kids eat food in the grocery cart while we were shopping. My resolution lasted through my first child but went out the window when I had my second child. At that point, it devolved to: “Keep the package so we can pay for it at the register.”

JuLeah W. swore she’d never say this to her kids . . . but she’s not the only mom who’s resorted to it on more than one occasion. Sometimes logic just doesn’t work. And sometimes, as Jenn H. succinctly puts it, the answer really is, simply, “Because I told you to!”

How many of us swore we’d never say these words to our kids? Boy, how things change! Once she became a mother, Circle of Moms member Ntombi S. realized she instantly understood all the things her mom used to say to her and I bet this pearl was among them.

In Stephanie S.’s house this sentence ends with “Swiper” (from Dora the Explorer). Most moms have some similar threat. In our house, there’s a variation of this that goes like, “If you don’t start putting your toys away, I’m going to put them all in a trash bag!” I never thought I’d say such a thing, but I guess there are only so many times you can step on LEGO toys or a sharp little Barbie shoe with your bare feet before you reach the end of your rope.

If you’re not a mom, it’s hard to get away with saying this sentence. Then again, if you’re a mom, it doesn’t sound weird to you because, like Nikki B., the mother who admitted to saying it, you’ve had those moments when you’ve wondered if your child needs a diaper change . . . or a change of diet!

What's something strange you've caught yourself saying to your kids?