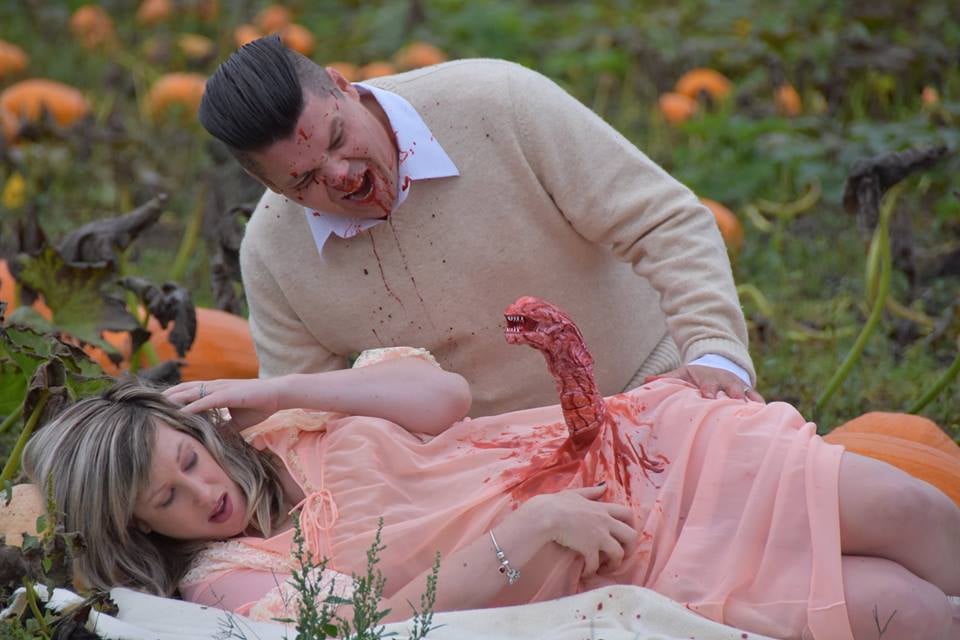 Todd and Nicole Cameron, a couple from British Columbia, Canada, wanted to make a big splash to celebrate their pregnancy. And while they don't deny that there's something sweet about doing a heartfelt maternity shoot, the pair decided to go the opposite direction with a scary movie-inspired theme, and the pictures have some serious Alien vibes.

"I found the alien chestburster model at a garage sale this Summer," Todd told POPSUGAR. "As I was putting it together and painting it, the idea of this shoot came to me. I talked to Nicole, and she wasn't keen on a regular maternity shoot, so we decided that this would be a fun way to spread some laughs."

"Hopefully, the baby is human!"

The soon-to-be father of two explained that he and his wife really wanted to capitalize on Nicole's mid-October due date. "If you're going to do a Fall Halloween-themed horror maternity shoot, what better place than a pumpkin patch? Luckily, there is an awesome local pumpkin patch/corn maze that was all too helpful."

And naturally, everyone who caught a glimpse of the photos couldn't stop talking about how insanely creative they were. "Our family was over the moon excited," explained Todd, and the couple's photographer, Li Carter, immediately agreed to do the shoot upon hearing the idea. "She loved it! She has done a number of fun photo projects with us, and we make a great team," said Todd. "So she jumped at the opportunity."

Nicole and Todd wanted to be surprised with the baby's sex, however. "We have decided to wait to find out," said Todd. "Hopefully, the baby is human!"

Read through to get a peek at some of this truly terrifying maternity shoot, and try not to scream in the process.

Celebrity Trainers
Peloton's Jess King on Her Pregnancy Journey: "I Had No Idea What I Was Up Against"
by Jess King 7 hours ago