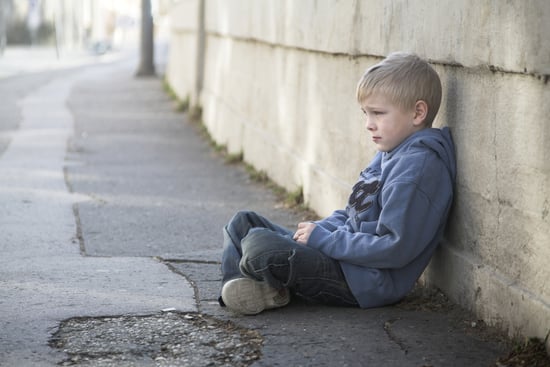 The first day my child started school, he became the subject of the class bully's attention. Starting at school for the first time is nerve-racking enough for both parent and child, but to have that first day memory shredded by bullying is truly awful.

My son Jack is a shy boy. He takes his time to get to know people and tends to stand back until he feels more confident. He is always nervous in new situations and was the same on his first day at school. I tried to settle him quickly and leave as the teachers advise you to, but he wasn't wanting to let go of my hand at all. Finally I extracted him, assuring him that it would be fine, and left.

When I picked him up at the end of the day, I felt he wasn't himself. He was quiet and thoughtful, and no amount of prodding could get anything out of him. The next day he didn't seem keen to go to school, but we persuaded him that the second day is always better. Again when I picked him up, I felt that something was wrong, but he wouldn't give much away apart from saying "I don't know" whenever I asked what he had done at school that day.

By day three, I knew that something was definitely wrong. I wasn't sure if it was just tiredness, but I noticed how his normally tall frame was slouched and he was pale in the face. Again, he wouldn't tell me anything, so I was determined to find out what was going on by asking his teacher the next day at school.

His teacher couldn't shed any light on anything either. She thought he was doing OK and that he seemed to be making friends. As far as she could tell, everything was fine. But when I looked at Jack as I left him in the classroom that day, I felt my heart sink. He was sitting quietly in the corner away from the other boys, and his eyes were large, his face pale. He desperately wanted me to stay.

That day when I picked him up from school, it finally came to a head. He was white-faced and shaking, hunched over and sobbing. What on earth had happened, I asked, concerned. It seemed a couple of the boys in his class had thought it funny to pick on the new boy that week. It had come to a head that day when they ran off with his lunch box, and then, in front of the other children in the playground, they had tipped his lunch out of its packaging and jumped up and down on it.

Jack was mortified, upset, and confused. He had never come across this kind of behavior before at kindergarten, and he didn't know how to handle it. He disappeared off to a corner of the playground by himself and sat there until the bell rang. He had no concept of telling the teacher or of getting his lunch box back from those boys and standing up for himself. He just crumpled.

When I saw him, he starting sobbing. Great heaving sobs with all of his grief and embarrassment coming out. I was shocked, angry, and upset. I was shocked that something like this could have happened at the school with no teachers even noticing. I was angry with the young boys and wanted to scream and shout and shake them right then and there. I was dreadfully upset to see my gorgeous boy crumpled like this. Luckily I had packed snacks and I fed him in the car, hugged and kissed away the tears, and reassured him it would be fine. I ran a bath for him at home and soothed him with stories and hugs and love.

The next day was always going to be difficult. My husband and I disagreed on how to handle it. I wanted to keep Jack off school and protect him. My husband advised me that he would never want to go back if we did that and we needed to get him there sooner rather than later to face his tormentors. So, off to school we went with me determined to scold teachers, parents, and boys thoroughly.

I queued up to see the teacher with other parents, Jack firmly under my arm. When it was my turn, I told the teacher everything. She was shocked, and the other parents who had overheard were shocked too. I had made no attempt to lower my voice as I wanted everyone to know how bad this was and how appalled I was that no teacher had been around to stop it. The teacher reassured me that she would find out who was on "playground duty" that day and let the principal know. In the meantime, she looked kindly at Jack and said: "Are you able to name the boys who did that to you?"

"Tom and George," Jack replied. There was a gasp from behind us. Tom's mom was queuing to speak to the teacher behind us and had heard every word. When she heard her own child was responsible, she was horrified. She scolded him thoroughly then and there in front of the whole class. This was marvelous because not only was Tom made to feel the humiliation in front of his friends that Jack had felt the previous day, but Jack saw him being told off and then punished, which made him feel much better.

The other boy was dealt with too and the parents were incredibly understanding and reassuring. It turned out that Tom's mom was wanting to talk to the teacher about Tom's behavior as well, so she already knew that he was becoming out of control. The school also dealt with it well. Tom was due to move up to the next grade the following term but was kept down. The school came down hard on him and the other boy, and the principal doubled the amount of playground duty teachers on each lunchtime. Also, the school put in a new system where each class had a place to sit and have their lunch with their class teacher before they were allowed to go play.

One year on Jack is thriving at school. He loves it, and you know what? Jack and Tom are now firm friends!

Family Life
Exactly How to Talk to Your Kids About the Election at Any Age, According to Experts
by Sydni Ellis 16 hours ago