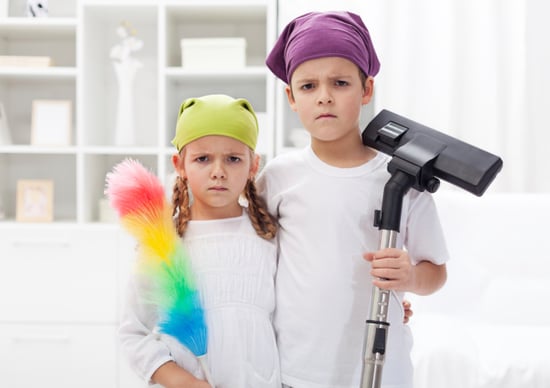 You want your children to be successful and independent and you certainly don’t want to do too much for them, but there’s a line between reasonable expectations and expecting too much from your kids. How do you know when you’ve crossed that line and are asking your kids to be more mature than they are able to handle? Circle of Moms members are here to help you figure that out.

How High is Too High When it Comes to Chore Expectations?

When it comes to chores, I think I dropped the expectations ball with my older children. Though I’m expecting more of my 3-year-old than I ever did of his siblings at the age, it’s really hard to get the volley going again with the tween and teen.

I regret it, too, because, like Circle of Moms member Kimberley F., I watch my preschooler take pride in helping me set the table, put his dirty clothes in the hamper, and organize his toys.

Maybe if I’d set the bar higher earlier, I’d have older kids who don’t think I’m expecting too much when I ask them to clean their rooms and do their own laundry, expectations that moms agree are perfectly reasonable.

Keep reading for more signs that you're expecting too much.

Can You Expect Your Kids to Be OK Alone Together?

When my youngest was an infant, I expected his teenage sister could watch him for an hour in the evening while I put the middle guy to bed, but I forgot she’d never been around an infant before. Listening to the baby wail and his sister’s increasingly frustrated voice, I can’t imagine what I was thinking — it was too much to expect.

Although many moms say they think it’s fine even to leave a toddler and a baby in a room together as long as you’re in hearing distance, after that experience, I can’t imagine expecting two young kids not to act impulsively toward each other.

Mom Billie Jo Z. discovered that even a desire to help can be harmful when you’ve got two little ones alone together. Her toddler kept trying to take the baby out of the crib because the baby was crying. Now Billie Jo takes the baby from room to room with her to keep her safe.

Denise D. summed up what you can expect of your children alone together in one sentence: “Things get dicey quickly with kids, you turn your back for a minute even when you're in the room and things just happen.”

Should You Expect Your Kids to Get Along?

One mother of three, Kimberly B., has a good handle on what she can reasonably expect in terms of her kids getting along with each other. She says that even though someone always wants to be “right and in control,” she expects them to learn to work together, even if they don’t like each other very much.

Should You Expect Your Kids to Take Care of Their Stuff?

Mom Christine gets so frustrated with her 5-year-old’s inability to take care of her toys that she’s thought about taking them all away and making her earn them back. When Pati H’s teenage daughter loses or damages something, she’s expected to go without it until she’s able to replace it herself.

While moms agree that Pati’s expectations of her teenager are reasonable, some think that Christine is expecting too much of her 5-year-old. They suggest other measures, like a “toy jail” for things that aren’t taken care of or put away.

I agree in both cases. Kids need to learn to be responsible for their belongings, but the way they learn that is by having belongings to take care of. A broken or lost toy that you’re not willing to replace reinforces your expectation that your child needs to take care of their things. By the time they’re teenagers, that lesson should be firmly in place, and if your child wants a replacement, it’s up to them to figure out how to make that happen.

What to Do When You’re Expectation-ing

Holiday For Kids
Etsy Has So Many Matching Holiday Family Pajamas, and These 15 Options Are Adorable
by Krista Jones 4 days ago

Halloween
Your Kids Will Look Just Like Disney Characters Thanks to This Nifty Makeup Tutorial, Masks Included!
by Murphy Moroney 5 days ago