Some of the biggest names in Hollywood will share the big screen in the upcoming comedy What to Expect When You're Expecting, which follows different mothers-to-be as they prepare for the arrivals of their bundles of joy. Cameron Diaz, Brooklyn Decker, Anna Kendrick, and Elizabeth Banks are among the famous ladies who strapped on fake baby bumps to portray different kinds of pregnant women, and Banks's character, Wendy, doesn't exactly have an easy time of it. 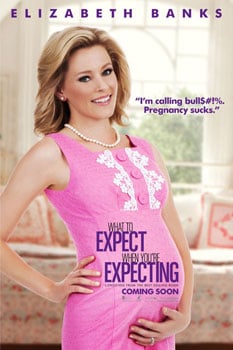 I visited the Atlanta set of the film last year, where Banks was shooting a climactic scene in which her character addresses all the woes of pregnancy — in an auditorium with a rather large audience. The hilarious meltdown, which you can see in the opening of the trailer for What to Expect When You're Expecting, includes harsh truths like "I'm calling it: pregnancy sucks." It was great fun to see Banks film the passionate speech again and again, especially since the funny lady mixed up her one-liners from one take to another. What was even more interesting was seeing all of the extras who played the audience members, since the group of women was a mix of actual pregnant women and women rocking fake baby bumps.

I chatted with Banks about her own experience filming the movie, and she revealed that she actually felt like she was in her own little movie, since she doesn't have much screen time with her costars. Banks was refreshingly honest about not having any parenting tips and also admitted that though welcoming her son, Felix, has brought her a great deal of joy, it hasn't changed her stance on how she feels about kids in general. Here's more of what Banks had to say about pregnancy and motherhood:

What inspired you to take this role?
Elizabeth Banks: I cried when I read the script. It has a really great ending: at the end of the movie, everybody has a baby! It really is just a very relatable story for everyone: anybody who is a parent, has considered being a parent, has a baby, whatever. It's just very universal, what happens in the film. We really explore so many great storylines and different paths to getting a child. I had a unique path to getting my son, so I understand how everybody's path to their child is different.

How does it feel to wear the bump?
EB: It's sweaty! [Laughs] I think it's probably a decent approximation; it weighs a good 10 lbs. The boobs weigh about 6 lbs. They are really unbelievable. It's fun. It definitely makes you sit and walk in a totally different way. As an actor, it's a great prop.

How did you change when you became a mom?
EB: I get drunk much faster and easier, and it's a big problem, so I can't go out very much. I find that I underestimated the amount of joy. I'm really learning about my capacity for joy through my son.

To see what Banks had to say about baby fever and her parenting tips, just keep reading.

What can you tell us about your character?
EB: My character, Wendy Cooper, owns a store called The Breast Choice, here in Atlanta, which really does cater towards breastfeeding. My husband is a dentist, and I imagine that we met during our medical training, and that I studied to be an RN, and became a lactation specialist, and then ended up doing that as a consultant, and then opened my own little boutique.

Do you and your character have the same feelings about pregnancy?
EB: My character is probably closer than anyone else in the movie to how I feel about pregnancy. I definitely feel that pregnancy is an amazing thing that sets us apart from the lesser race, men [laughs]. But at the same time, I think it's different for everyone and I find that there's a lot of judgment in our culture surrounding pregnancy. I think what's great about my character is that she goes at the judgment head on. And she is a very judgmental person at the beginning of the movie and really learns a lesson over the course of the movie, that everybody has her own experience, and you can't tell people how to live, and you just gotta go through it for yourself.

Do you get baby fever at all being on the set?
EB: Nope. I have no baby fever. I find that being a parent doesn't make you like other people's children any more than you ever did. I think you really only like your own children. I think men kind of know that and women have the maternal instinct, so we're more tolerant of other people's kids, but I'm good. I'm good with my son. I don't want to babysit or anything.

Do you think motherhood will change the kind of roles you'll take on?
EB: Well, it changes the dynamic of your life. Acting is a very itinerant lifestyle, so we're never home, and that's gonna have to change for me as my son grows. Right now he's a very easy travel companion, but I know that won't be true forever. And he has a lot of sh*t that goes along with him. It's just so much to bring with you. And I feel like it's probably a little unfair to him to uproot him all the time. So that will change, I'm sure. It means doing a movie here, in a nice city like Atlanta, where we're very well looked-after, is very nice, but doing that grungy indie where I play a heroin addict on the side of the road in Nowhere, Alabama, is probably not in my near future.

How much have you gotten to ad lib on the set?
EB: I like to ad lib, a lot of actors don't like to ad lib, so it's mostly an E-Banks situation. Partially it's because sometimes I don't remember my lines, and partially it's because I have to do it so many times in a row, so to really make it feel fresh for myself, I'm always looking for a fresh moment in every take, or a new angle on it.

Do you have plans for another baby?
EB: I don't know. No one knows what the future holds.

Do you try to hide the less-glamorous realities of parenthood in your real life?
EB: I find it's much more fulfilling, and fun, to discuss with your girlfriends the really hard stuff. I mean, my kid is clearly a genius. And clearly advanced. And clearly large for his age, and all of those things, because I have to say that, as of now. I mean, maybe he's a dummy. I hope not. I don't really take too much pride in my accomplishments as a mom because I'm sure my failures are right around the corner. I haven't left my kid at the McDonald's parking lot or anything — that happened to me as a child, I was left, by my mom — but I'm sure it's coming for me.

Since the movie is made up of different vignettes, did you get to shoot a lot with your costars?
EB: No, in fact, it feels like they are making four or five different movies. They made a Cameron Diaz movie, they made a J Lo movie, they made an Anna Kendrick movie, and now they're making a Liz Banks movie. I don't know what anyone else did, I hope we're all in the same movie.

Do you have any secrets or parenting tips?
EB: I believe in common sense, above all. I'm worried for parents that we put so much pressure on perfection and getting it right and I feel like a little bit of sloppiness is OK, and it teaches self-reliance and all those things. I approach it with an easygoing attitude. I'm one of those people who's like, if I leave my baby in the care of someone else, and I come home and the baby is still alive, they did a great job. Including my husband.

Hero Fiennes-Tiffin
Waiting For After We Fell to Be Released on Netflix? Here's When You Can Get the Popcorn Ready
by Simrin Purhar 12 hours ago

Movies
Dune Fans Rejoice! A Sequel Movie Is Possibly in the Works
by Amanda Prahl 14 hours ago