Here's a post from our partners at BabyCenter! Every week, we bring you the best parenting and lifestyle stories from the experts at BabyCenter, including this post from Evonne Lack about still nursing her son at 18-months. 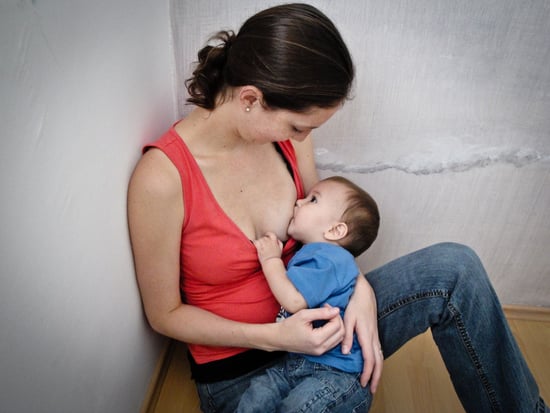 William, this baby who started tapping on my heart about seven years before he was conceived, is almost 18 months old. He's still nursing — once before bedtime, again in the middle of the night (most nights), and yet a third time upon waking in the morning.

Occasionally — maybe once or twice a week — he'll "ask" to nurse in the afternoon by tugging on my shirt. Usually, I give in.

"Once they can ask for it, it's time to stop," natter the naysayers. Every time I've heard a naysayer naysay this, she (sorry, but it's always a she) accompanies it with a little laugh, as if it's so ridiculous to still be nursing your baby when he's no longer really a baby, so ridiculously off the wall that she can't even naysay about it without that embarrassed giggle.

Ask a naysayer why someone would still be nursing after 18 months, and she'd probably say it was due to laziness, or a weird dysfunctional attachment to the child, or a lack of willingness for the child to grow up.

Those naysayers get on my nerves.

But you know who else gets on my nerves? "Proud Mama's" who are so damn proud of breastfeeding (they always say "breastfeeding" instead of "nursing") that they judge mothers who don't breastfeed, and make inane statements about how people who don't breastfeed "just aren't comfortable with their bodies," and sign their computer signatures like this: "(.)(.) Proud Breastfeeding Mama! (.)(.)"

Ask a Proud Mama why someone would wean before 18 months, and she'd probably say it was due to laziness, or a weird lack of attachment to the child, or a desire to make the child grow up too fast.

Jeez. We eat each other alive sometimes, don't we?

Fortunately, these are the extremes. I think most of us are in the "to each her own" camp; it's just that the naysayers and Proud Mama's have louder voices.

Anyway. William started tapping at my heart about seven years before he was conceived, and now he taps at my breast, tap tap tap, and I give in. I suppose laziness is part of it, actually, as well as — yep — an unwillingness to let him grow up. And hell, I may as well admit it, there's a little pride in there too, but not obnoxiously so.

And partly (partly, I say!) I nurse him because I'm still trying to get myself to believe that I actually had a third baby.

I mean, I never got used to it, you know? The fact that I had a third baby, this tapping son, was always a bit infused with disbelief, like a dream, from the moment he was born. And now he's not even a baby anymore! He's a toddler, and I can't begin to believe that, because I didn't accomplish believing the baby thing yet!

It's kind of like radios. I never bothered to learn how they worked — soundwaves? what? — and now there's way too much technology in the world for me to even begin to understand any of it. It's too late, I'm too behind.

Does this make any sense at all? Probably not.

3rd grade and 1st grade start on Monday, and my baby is a toddler, and everything just keeps spinning.

At least with the nursing, I'm spinning right there with it.

More great reads from BabyCenter:
7 household items that make great toys
One family's journey back to homeschooling
The secret to the best chocolate chip cookies
11 stylish diaper bags from Etsy
Yoga for babies, toddlers, and kids

Babies
These Old Navy Infant Pieces Made Us Shout, "Oh, Baby!" as We Filled Our Carts
by Morgan Ashley Parker 6 hours ago

Summer Olympics 2021
Thanks to Vocal Moms, the Tokyo Olympics Will Allow Athletes to Bring Their Nursing Babies
by Karenna Meredith 3 weeks ago