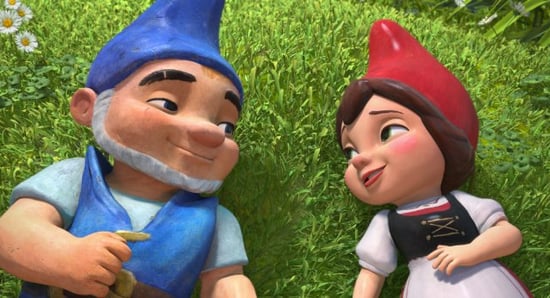 Go gnome this weekend! I'm not a fan of watching movies more than once, but I've already seen Gnomeo & Juliet twice (Disney flew me down for the premiere). And I can't wait to take my kids and see the animated musical again from their perspective. As a mom, I take a chance every time I head to the theater with my three children — ages 6, 4, and 1 — and cross my fingers that my littlest guy sits still. If any film can create the glue to keep him in his seat, it's this movie. Based on Shakespeare's Romeo and Juliet, this quirky 3D version involves British garden gnomes, Elton John cameos, and an upbeat soundtrack, but it also artfully delivers the message that love conquers all in a more positive and age-appropriate fashion than the penned original. Gnomeo & Juliet does so by being clever.

The highlights of this movie are all in the details — from the clinking sound that occurs when the adorable gnomes touch to a well-choreographed, romantic ninja scene. The film fully embraces the entire family because as much as it caters to children with its animated eye candy, there's also plenty of over-their-heads innuendo to keep adults laughing heartily. I don't want to give anything else away, but if you're looking for a feel-good and engaging family flick, buy tickets.

Product ReviewsDisneyMoviesKid TV And Movies
Around The Web

Movies
The Wickedly Magical Ending of Craft: Legacy Leaves a Possibility For More Sequels
by Mekishana Pierre 13 hours ago