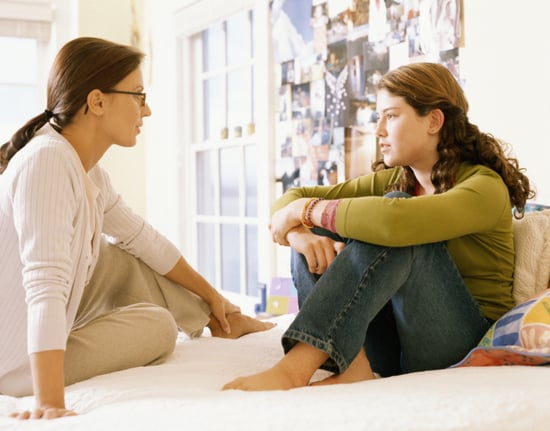 When Krista M. was young, her mom never had "the sex talk" with her, and as a result, she says she "learned bits of misinformation from friends and in school." The whole experience left her mortified. Like many Circle of Moms members raised in homes where conversations about the birds and the bees were taboo, she's "committed to approach sex education in a much more healthy way" with her own daughter.

But that's not always easy to do in today's environment. Some schools have started distributing condoms as early as first grade, and reality TV and the Internet bring sex into children's bedrooms via their computer and TV screens, many Circle of Moms members like Jillian J. point out. "I had to talk to my 9-year-old recently because a classmate told her she should check out a Web site about sex," she says. Similarly, Mandy W. notes that her 10-year-old daughter is "starting to talk about the sex she's seeing on TV." Turning to Circle of Moms members for advice, Mandy asks, "What age do you think it is acceptable to discuss the facts of life with your daughter?"

With kids talking about sex earlier than ever, it's not easy to know the right time to talk to kids about sex — or the most appropriate way to do it. To help, other moms have shared five key pieces of advice.

Keep reading to find out their biggest dos and don'ts.

1. Don't Wait Until They're Teens

The birds and the bees talk isn't just for teenagers, recommend Circle of Moms members like Annmarie A. She encourages moms to start when kids are young (she started when her daughter turned 6) and be intentional about what they are teaching their children about sex. "Sex is an ongoing conversation I have had with my daughter from the very beginning," she says about her 14-year-old daughter. "I gave her info as age-appropriate as was necessary at each stage. I told her my number one priority was her health."

Cindy S. also feels strongly that it's important to take the initiative with the sex talk and not wait until your child is a teenager in the throes of a sexual relationship. "The right time is as soon as they start asking questions," she insists, "because it keeps the lines of communication open." Cindy also adds that she's glad she talked to her daughters early, because by the time they were in fifth grade their classmates were already talking to them graphically about sex. Because she already had the talk, her daughter felt free to have a candid conversation with her mom: "Luckily, my daughter came home and talked to me about it. We had a nice discussion about sex at that point." Cindy' older daughter is still open with her, too: "My eighth grader has talked to me about some of her classmates having sex. I love the fact that she is still comfortable openly talking to me about it."

2. Do Take the Initiative

Don't leave condoms and conversations to the schools, say many Circle of Moms members. Tiffany V. insists that it's a parent's job, not the schools', to teach kids about sex: "I think as parents we have to step up and talk to our children about sex. My mother bounced around the subject of sex with me because she was uncomfortable and I vowed to never be that way. When my children are old enough we will begin our sex talks and I plan on informing them in every way possible about safe sex, STDs, and pregnancy. . . . I want them to be able to make an informed decision and know how to protect themselves when the time comes." Stephanie S. agrees: "I'm not saying that sex ed shouldn't be taught in schools, but I do agree that a lot of parents are leaving it up to everybody else to teach their children."

Other moms are more skeptical about whether or not sex education should even be taught in schools. Kayla P. believes sex education should be taught in the schools only as a last resort, and says it's better for children to get the facts somewhere if their parents haven't had "the talk." But she feels strongly that parents — and not schools, need to take the initiative in teaching sex education to their kids. "Many parents say they don't have the time and are too busy to talk to their children, but if they don't do it, only then should schools step in," she says. "If their parents aren't around, then I think certain topics about sex should be taught in public schools."

3. Do Research the School Curriculum

Some moms are also skeptical about whether or not sex education should even be taught in schools, and even more specifically, about whether school curriculums should include information about contraception. When a school in Massachusetts announced they would be providing condoms to kids in first through twelfth grades, Circle of Moms members like Sherri C. were very upset. "I would go through the frigging roof if my kids' school did this," she declares. Tammy F. is particularly upset that a school was dispensing condoms to such young children: "First grade is a bit ridiculous." To avoid being surprised by what your child learns at school, be proactive in researching what the school plans to teach.
4. Don't Nickname Private Parts or Talk in Vague Terms

Giving private parts cartoon-like or inappropriate names isn't exactly a lesson in realism, say Circle of Moms members like Jenna R. Using the correct terms for body parts helps to create a level of comfort instead of shame, she adds. "Tell them straight up. Don't hide it, but don't get too graphic either. Be blunt and honest," she says. Being frank and direct is the natural and right way to teach kids about sex, says Circle of Moms member Kattia P. "We use the correct terms for body parts," she says. "If they come to us with questions we give what we feel is the correct age-appropriate response. More often than not kids are just looking for a simple answer not a biology lesson."

"The talk," shouldn't be a one-time conversation, but instead an ongoing process, say Circle of Moms members like Julie N. She started teaching her now 12-year-old at 8 years old. "I have just answered her questions as they arose," she says. "I think what we all need to remember is that the facts of life is not just about sex, it is about growing up and all the things that happen to us physically and emotionally."

How did you handle the sex talk with your children?

Source: Thinkstock
Tweens And TeensParentingSex Ed
Around The Web

Tweens and Teens
A Mom on Battling Gender Norms While Shoe Shopping With Her Son: "It's About Challenging the Status Quo"
by Murphy Moroney 1 day ago

Tweens and Teens
Based on a True Story, Disney+'s New Biopic Clouds Shows the Importance of Living in the Moment
by Murphy Moroney 6 days ago