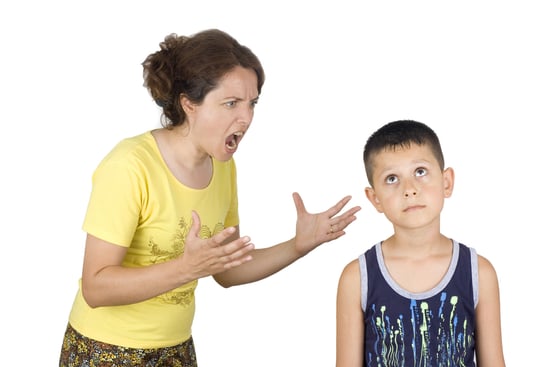 "I really don't want to take out my depression and my anger on my little kids, but I always do." — Maria

Motherhood, as the moms above reveal, is not always a picnic. Every parent has moments she regrets later, moments where rage overcomes logic. As a Circle of Moms member named Maria offers, "Parenting is hard! There's so much to do and think about that we put ourselves last on the list of a million things to attend to. There is only so much neglect that we can put ourselves through before we snap."

If you let your own needs go unmet over time, an outburst at the people you're with most, including your children, is inevitable. But most of us know instinctively that it's important not to vent our frustrations on a child and that it will just make everyone feel worse.

So how do you avoid these moments? How do you know when you really need professional help to do so? Keep reading for moms' tips on gaining control over anger.

A mom named Judi shares that in the past, "boxing up" her feelings led to depression. Having someone to talk to on a regular basis is very important to prevent the bottle-up, she says. "Coping methods and friendship or family are the best ways to deal with this! Women are made to talk to process thoughts, so socialization is big!"

Marie L. has also found that anger is overwhelming if you don't find ways to let it out. She counsels that "talking to someone about what is at the root of the anger will be like getting a weight off your shoulders."

2. Put Yourself in Your Child's Shoes

To try to control angry outbursts, Danielle K. advises a dramatic shift toward empathy. When anger overcomes you over little things, or nothing at all, she says you should try to forget about what's making you angry and instead focus on your child: "Start feeling what she must feel when you get angry with her. Put yourself in her shoes. Don't just think about it sometimes, think about it all the time."

Some situations are best handled after you calm down and count to 10. When Clotilde A. was a new mom, she had trouble controlling her anger. One of her first coping methods was to take a breather: "What I did to cope until I found the right help was to put the baby down in a safe place and walk away and take a breather every now and then."

With older kids, don't be afraid to ask a friend or family member for sitter help so you can have some time to yourself. A little time away from her kids once in a while is what worked best for Victoria L.: "I figured out that friends (no matter how much they're dealing with) and family were always there even if I just need a break to take a nap."

A member named Maria has found that it can be especially hard to take time for herself as a single mom but that she had to do it anyway: "I had to swallow my pride and ask my mom for help. If that's not an option, then talk to your siblings, friends [or] neighbors — anyone you can trust with your kids."

So what do you do with that alone time? Maria goes on to say she uses her time to exercise: "I usually go to the YMCA and exercise or take a yoga class. Anything that helps relieve stress and makes you feel good."

Veronica H. also finds that exercise helps her work out anxiety and anger, but that you have to stick with it: "It was really hard to get started with it, though, because I was so tired all the time and wanted to spend every spare minute sleeping. It took about three or four months before it started getting easier, so I really had to push myself hard."

When all the anger management tricks in your book fail and you lose your cool, many moms say that apologizing to your kids is not only important, but that it also creates an opening for talking about why their actions made you so angry in the first place. Having these types of conversations helped Michelle S. discover that her daughter can learn from the explanation even after the fact: "I give her options and ideas [on] how to avoid pushing my buttons the next time the same kind of situation arises."

Michelle also makes sure to admit it when her angry response was not her daughter's fault and to ask for forgiveness: "Children are quick to forgive and want to make things right so they can feel good about their parents and themselves," she offers.

How do you know when your anger is so unmanageable that you should see a doctor or therapist? Mom Amidy I. describes the moment she finally understood she was out of control:

"I realized I needed help the moment I had my 2-year-old son backed into the corner of his bed and I was in his face screaming at him for something stupid. I had a serious rage issue! Dumb things would set me off and I would lose it." She was diagnosed with depression, and her doctor gave her a prescription that helped tremendously. She goes on to say, "Not many people think of anger problems as depression, but a lot of the time it is."

Ashley M. recommends seeing a therapist to work on anger issues and to be completely honest with them. "When you get that mad and can't control yourself, there's no saying what can happen. You just need some help, and it's out there, but you have to look for it."

Prescription drugs can help with issues such as depression, anxiety, and even anger. Moms are on both sides of the fence when it comes to medicating the problem. While some feel that being "doped up" is not a solution, others found it was the only thing that helped. Angie F.'s doctor prescribed a drug similar to Prozac:

"I was feeling desperate so I just decided to try it. Within two weeks I didn't feel any different except more of a calm come over me. Like, I just didn't react in an irritable way and my tolerance level really was much higher. I'm not going to say I never snap or get angry or feel irritable, but it really helped me by making me feel more even-keeled. I'm really glad I did that."

The important point that several moms make is: don't wait to seek help. Anger issues will not solve themselves. Jeanette R. stresses how seriously this problem could damage the relationship you have with your child forever: "If this continues, it could rub off on her and she will resent you for it later." Jennifer R. has similar advice about breaking the cycle: "Seeking professional help for yourself and your daughter could help you both heal and save her from repeating history."