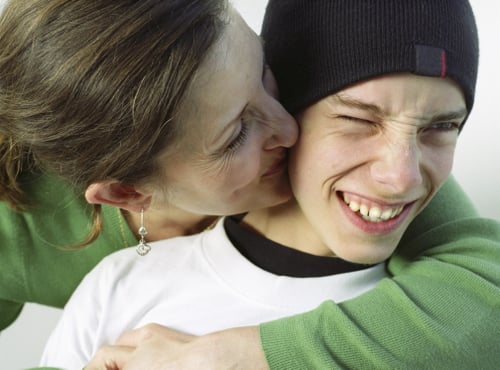 If your teen hasn't told you that you’re embarrassing him, it’s more likely a matter of when he’ll say it, instead of if. Most parents don’t set out to embarrass our kids: we do it unwittingly. Here are some ways you might be embarrassing your teen without even knowing it:

By his teen years, your child is starting to stake out his individuality and start forming more mature relationships with other people. Kissing or hugging him in public or saying “I love you” out loud can make him feel less than mature in front of his friends. Unfortunately, the definition of a public display of affection can not only vary from teen to teen, but from day to day as well. As one mom Jurnee S. puts it, “one day they want you to wave goodbye at the bus, and the next, they want you to wait in the car.”

On the other hand, it can be even more embarrassing for your teen to have you get angry at her in public, whether it’s in front of her friends or in front of strangers. Your teen is overly aware of the people around her, often to the point of thinking that everybody is watching her. The truth is that, if you’re yelling, people will be watching. What your teen doesn’t understand is that they’re more likely to be wondering why you’re losing control in public than wondering what she’s done to incur your wrath.

Keep reading to see how else you may be embarrassing your teen.

Talking too much in front of his friends

Sometimes it’s not just yelling at your teen in front of his friends that embarrasses him, it’s talking to him at all when his friends are around. And what you say doesn’t even matter. Just the idea that you might possibly say something stupid is enough to make most teens swear you to silence in the carpool lane.

Talking too much to her friends.

Then there’s talking directly to your teen’s friends. It’s a definite source of embarrassment, as it directly increases the likelihood that you will say something stupid that her friend will hear, or ask questions that your child will deem too personal. And don’t even think about friending her friends on Facebook — it’s a sure way for them to see how lame your child thinks you are.

Talking too much to your friends.

Your teen probably doesn’t mind if you talk to your friends in private — it’s when you do it at a school event or a store that it’s embarrassing. Somehow it’s unfathomable to some teens that you have friends and interests of your own.

Trying too hard to be the “cool” mom.

If your interests coincide with those of your child, you can probably find low-key ways to be a cool mom without embarrassing your teenager. Going out of your way to hang out with your teen and his friends or overlooking things like drinking at parties so you can be the fun parent can not only be embarrassing to your teen, but for you as well.

Trying to talk like your teen is another thing that might embarrass you as much as it embarrasses her. Sure, it can be beneficial to your relationship to learn to text and tweet, but peppering your conversation with phrases like “hashtag: first world problems” or "OMG" is bound to prompt a “that moment when my mom said 'OMG' to my friend. #uncoolmoms” Twitter update from your teen. And you’re not likely to be tagged in it either.

Image Source: Thinkstock
Tweens And TeensParentingParenting Tips And Advice
Around The Web