One of the most frustrating aspects of sending kids off to school for parents isn't making sure their lunches are made or getting them to the school bus on time. It's the realization that, at the end of the school day, they are going to ask their child how their day was . . . and get silence (or, at best, an annoyed "fiiiine") in return.

Even Kristen Bell had that problem when she began sending her two daughters to year-round preschool. She'd pick them up, curious about what they did that day, only to get one-word responses to every question she asked.

Related:
Ways to Find Out How Your Kids' School Day Really Was

Then, she tried something different.

"Kids don't naturally want to tell you about their day because they want to live in the moment — they don't want to live in the past," she told POPSUGAR in an interview promoting her partnership with Old Navy and Omaze on a back-to-school shopping spree contest. "So I figured out a solution that works for our family."

In this instance, she reverted back to one of her key parenting philosophies: "Everything I ask my children to do in life, I explain to them why."

She, along with her husband, Dax Shepard, sat daughters Lincoln and Delta down and said, "Do you know why we ask you about your day? I ask you about your day and I ask Daddy about his day because we've been separated for a few hours and I wonder how you're feeling . . . if you experienced something today you want to talk about. Also because I'm interested and it gives us a chance to reconnect to each other. That's why people ask one another about their day. It also makes the other person that's being asked feel very good and valued. It's a nice way to show you love someone." 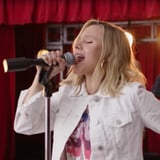 Kristen Bell's "Back to School Anthem" Is So Cheesy Yet So, SO Catchy

Kristen told POPSUGAR that when her kids hear her explanation with that context, "they understand that it's not just an obligatory, annoying question, that there's meaning behind it."

Now, she says, they "do really well" with the after-school Q&A session. "My kids don't brush me off. They say, 'It was really good, how was your day?'" she said. "They actually ask me how my day was."

Red Carpet
Lance Bass, Michael Turchin, and Their Twins Make Their Red Carpet Debut as a Family of 4
by Eden Arielle Gordon 13 hours ago