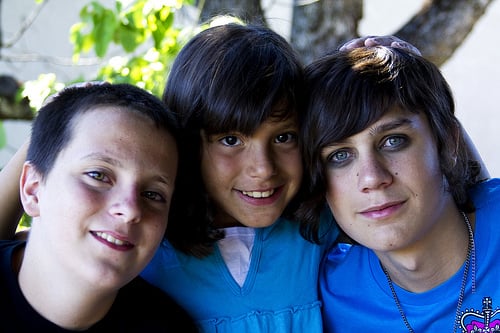 Having a child affects the relationship dynamics in a family. And when you’ve got three kids, it’s easy for the one in the middle to feel ignored.

“A child can develop ‘middle child syndrome’ only when feeling left out by the family,” says Atasha K. “For example, your oldest does really well at school and gets ample attention over good grades and, well, baby is the baby. Your middle child may feel that they are not as important or loved as the other children.” Children suffering from “middle child syndrome” can become “detached, moody, and careless if they feel they are being forgotten or skipped over,” she adds.

Cindy K says her middle child “presents more challenges” than her other two. “He is an amazing little spirit, and I love him intensely, but no matter the situation I am always having to correct him or call him down. I want so much for him to be able to grow up successfully, but he pushes every situation to not be pleasant and I end up fussing at him so much more than his brother and sister! At school he does fine, not outstanding, but good. At home it's just constant irritation to every other member of the family!” she says.

If you, like Cindy, are looking for tips to prevent your middle child from developing the syndrome associated with his birth order, Circle of Moms offers the following suggestions.

1. Treat All Kids Fairly
Parenting experts and Circle of Moms members agree that the best way to prevent middle child syndrome is to pay equal attention to all of your children. Middle child syndrome “is caused by the parents being too involved with the older and younger siblings, and not making enough time for the middle child, or excluding them in other ways,” says a member who calls herself “Firebird Bedard” and says her childhood was a classic example.

She recalls when her parents bought a teddy bear for her little brother. The following week, they bought another bear for her sister, the oldest. The third week, they bought another teddy and gave this one to her brother again. “I cried, so my sister, always on the ball, offered me hers without a second thought. I thanked her but refused, saying that I already got her hand-me-down clothes, I don't want hand-me-down love, too.” Firebird says, “a series of events like this made me quite bitter toward my family for a long time. I was a rotten teenager who felt neglected and unloved.” On the other hand, she advises that if you, “Treat all of your children fairly and equally, you should easily be able to avoid middle child syndrome. If two of your kids get a teddy, make sure they all get a teddy.”

Mom Lucy F. agrees that “middle child syndrome does exist, but it is the result of parenting that falls short of the mark rather than something that just automatically happens." If you carry on dividing your love and attention equally between your three little ones, "then it’s likely your children will be fine," she says.

2. Pay Attention
Of course, parents may not always recognize if they are playing favorites, which is why it’s important to be proactive and pay attention to what you’re doing instead of parenting on automatic pilot, and pay attention to how your child is feeling. If your middle child is being the “squeaky wheel” doing things that get him into trouble, then it’s possible that he’s acting out to gain attention, says Jennifer W.

Another sign that your child is suffering from middle child syndrome is if she seems unhappy. Vicky V. says her middle child is doing well academically, can make friends, loves music, and yet she notices he becomes a “desperately unhappy child” and is introverted around friends and relatives. In those instances, he realizes that “he doesn’t come across well to others” while his older and younger siblings are “charming, funny and comfortable in their skin. Therefore other family members (grandparents, etc.) and family friends tend to spend more time with the other two.”

Once you start paying attention and noticing trends, birth order should become less important, “because you will start thinking of ideas on how to combat it,” says mom Terri S.

3. Create a Special Place For Your Child
To prevent your middle (or any) child from feeling left out, parents can create special places for each individual. Even though you may spend a lot of time with all of your children, middle children often feel left out because “they know the oldest was first, and the baby is the baby. They don't have a ‘place,’” Danielle G. explains.

Niesha H. says her middle child seemed to like playing independently at home, so when she started school she thought she’d have a difficult time adapting, but she was surprised by the opposite. “She is amazing in school. She loves to learn and play with others. I think she was looking for a place or something that was just about her, and she found it [at] school.”

“If you spend as much time with each of your child[ren] as you can, and point out the good in all of them, then I truly don't think it matters what the birth order is," Tasha H. says. “Calling it middle child syndrome makes it sound like it’s the world's worst thing, where for my daughter, we have worked hard to make it special because she gets to ‘help' with baby brother and gets to do big girl stuff with her sister. [It’s] truly all in how you approach it.”

Tweens and Teens
Laura Sobiech on Seeing Her Son Portrayed in Disney+'s Clouds: "Music Is What Saved Him"
by Murphy Moroney 13 hours ago

Kamala Harris
Even Kamala Harris Is a Big Fan of This 11-Year-Old's Costume: "She Has My Vote"
by Yerin Kim 3 days ago