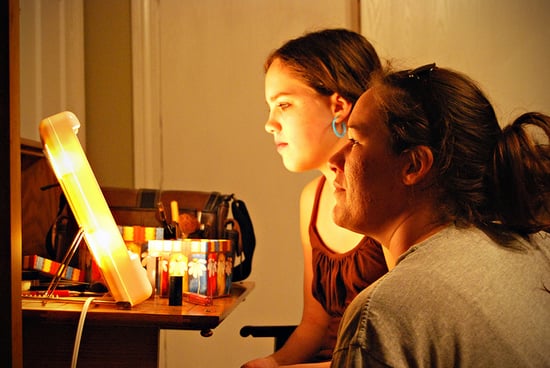 Just the word "teen" conjures up stress for many moms. But in many of our conversation threads, moms admit that they also don't want to become stressed-out worrywarts. So what's appropriate to worry about? And what's not if you have an emerging tween or teen? We asked moms on the front lines for their advice and tips for navigating the tween and teen years without living in a constant state of anxiety.

Prepare Yourself (and Your Tween)

The best way to hold the anxiety at bay is to make sure your soon-to-be teen knows the ground rules, says Emilia A., mom of a 16-year-old daughter. "I worry about many things," but "the thing is to be open with your teen so they won't make the same mistakes we did." She recommends moms "meet all the friends and know all the places your child likes to go with friends and watch the environment they are in."

In her efforts not to be the worry mom she fears she is becoming with teens, Terri W. says she purposefully takes steps to calm herself down and not let her anxiety over her teens get out of control. To do so, she seeks support from others. "When I feel too worried I talk to my mom or mother-in-law, because they have 'been there and done that' and it is easier to take their advice," she says.

Holly C. relies on self-care to try to reduce the worrying. "Worry can be a sign that your nervous system is stressed and not getting enough support, which is also very common in mothers," she says. "You can support your nervous system with a good multi mineral supplement, 4000 to 6000 mg of fish oil daily and herbal nerve tonics. If you take these consistently you should notice a difference in two weeks and have a well-nourished system in three months."

Like many members, Kelly W. accepts that part of the job of a mom, especially moms of teens, is to worry. "I remember reading a long time ago that being a mother means never again reading a newspaper without thinking 'that could be my child,'" she says. "I have also found that by letting them do things, the next time it is a little easier to not worry. Like last year when our boys had to come back a day early from vacation for camp, and my oldest drove three hours back when he'd only had his license about six months, it was easier the next time he drove."

Many moms like Julie L., who raised two teenage boys who are now in their 20s, remind fellow moms that "things will be fine really," as long as their children have an already established "good sense of right and wrong." "If they have a sense of respect for themselves and others, they should be ok with outside influences and have enough self-respect" to make smart friend choices.

Louise G., who also is worried about her daughter becoming a teen, says she has resigned herself not to sink into the worry hole, as difficult as that may be. "I suppose at the end of the day you just have to trust them and hope that over the years you have taught them enough to stay safe," she says.

Things You Should Worry About

There are certain issues that moms of teens should worry about, including academic performance, drugs, drinking, the Internet, and teen pregnancy. At the top of many moms' lists are the boys her daughters are dating and drinking. "If your son is drinking on a daily basis then you should be worried," she says. "His drinking could easily be an addiction and you worrying and your interference can possibly save him."

Drinking and drugs are also on the "ok to worry about" list for Kimberly N. "Yes it is quite normal to worry about your son and his drinking because he could become an alcoholic especially when it's every day," she says. Pleshette H. agrees. "I would be concerned as a parent. The age that he is and two the reason or frequency behind the drinking. My son just turned 19 and he always throws that up in my face. 'But mom I'm 19-years-old.' My response to that, is I don't care if you're a 119 years old. I am still your mother and I do out rank you."

How do you keep worrying about your teen at bay?