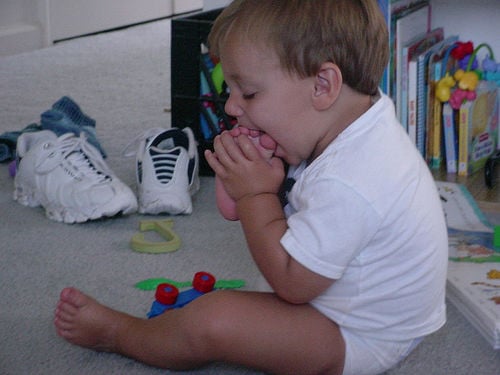 Toys, clothes, books, paint: it can be worrisome when your child constantly puts things in his mouth that don't belong there. What's a parent to do?

"My 2-year-old daughter . . . still puts everything in her mouth. Luckily we haven't choked on anything to this point, but I thought we would be done with this by now," says Jamie N., seeking the Circle of Moms community for advice. "Anyone else having or have had this problem and if so, what have you done?"

Carisa V. shares the same problem with her 4-and-a-half-year-old and 16-month-old daughters. "My oldest daughter is still putting things in her mouth. Sometimes I will tell her to take something out of her mouth only to find her putting it back in a minute later. My 16-month-old also puts everything in her mouth, which is probably normal for her age, but I'm afraid she will never stop because her sister does it. Any ideas on how to break this habit?"

For suggestions on how to keep unwanted things out of your young child's mouth, consider the following five tips.

When Brenda D. worried about her son's oral fixation (especially after he got a nickel lodged in his throat when he was 1-and-a-half), her pediatrician reassured her that his behavior is normal. "I talked to my pediatrician about it and she informed me some children will continue to put things in their mouths until 5 or 6 even." That being the case, "just be patient and know that he will grow out of it," Odette M. says.

It can't hurt, however, to consult your child's pediatrician about the bad habit. Your doctor will be in the best position to evaluate whether something such as lead paint or dirt poses any hazards, moms caution. For example, Kayleigh H. says her 3-and-a-half-year-old "literally eats everything," and she was advised to speak to her doctor about the eating disorder pica.

Meanwhile, Vanessa R. says when her children went through the phase of putting things in their mouths, they eventually had to be treated for pinworms. "Make sure you wash their hands constantly after they eat and play outside, and just keep telling them 'no' whenever you see them putting toys in their mouth," she advises.

Switch to Something Appropriate

Several moms suggest that if your child has a habit of putting things in her mouth, give her something that belongs in her mouth. "I give my son animal crackers that he can snack on throughout the day, so it is something not too bad for him, but something he can chew on," Brenda D. says.

An occupational therapist explained to Christa H. that her kindergarten-aged son puts things in his mouth when he is anxious. So, she puts something in his pocket at school to "play" with like a squishy ball, piece of silk, or a chain. "Every time he started chewing on his shirt he remembered what was in his pocket and started fumbling with that and not the shirt. I have seen a big improvement," she says.

Odette M. agrees with the notion of steering a child toward something else. "Redirect his attention to something you think he might find interesting," she says. "Try to refrain from pointing out what he's doing. If you do this enough, maybe you'll create a new pattern for him so that eventually he'll unknowingly redirect himself."

If redirecting your child's attention doesn't work, some parents suggest using a deterrent. Danielle C., for instance, used "Hoof Stop" from the finger-polish aisle at Walmart, which left a bad taste in her son's mouth. "It was tough trying to explain to a boy why I was putting fingernail polish on him, but it was clear, so it didn't bother him," she says. "I never said anything to him about it tasting horrible if he ever put his fingers in his mouth. Next thing I heard was him yelling, 'Mom, I need something to drink!'" After about five days of using the product, Danielle says his habit of putting fingers in his mouth stopped.

Katie L. says Johnson & Johnson soap has a bad taste, so she washes her son's toys in it. "The aftertaste is so nasty that he is beginning to learn not to do it," she says, noting that because it's a baby shampoo brand, she feels it's safe if he ingests a little of it.

Don't Make It a Big Deal

The final recommendation from Circle of Moms members is to not make a big deal out of the habit. "Do you think your son is doing it for the attention?" Stacy L. asks a mom whose son put things in his mouth. "Maybe he likes watching the reaction you give."

Shelagh S. says instead of giving your child a reason to repeat the behavior, "Just remove the article with a matter-of-fact comment about, 'That's what babies do, show me what a big boy/big girl does.'"

Jeanne V. agrees, noting that her 4-year-old daughter still puts things in her mouth "to get my goat," as she explores limits and boundaries with adult figures. "As tough as it may be, remind her not to do it and reward her when she listens," Jeanne says. "Positive reinforcement is what is needed here, in my opinion."