Season 2 of MTV's 16 & Pregnant is off to an explosive start! In the first episode, we watched baby mama Janelle disrespect her own mother and then expect her to care for the newborn so the teen could go out partying. Last night, 16-year-old Nikkole shrugged at the father of her infant's disgraceful behavior toward both her and her supportive mother. I was initially horrified by the first season, but quickly warmed up to the show and its stars — even rooting for them as they made their ways as Teen Moms. Do you think 16 & Pregnant offers an invaluable education to its viewers, or is it just giving pregnant teens an hour of unwarranted fame? 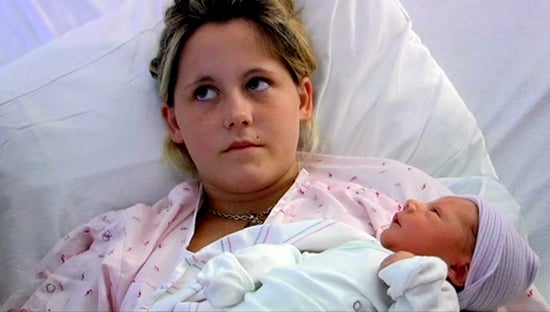 Image Source: MTV
MTVPollKid TV And Movies
Around The Web

Animated Movies
Netflix's Over the Moon Is a Must See, but Here's What You Should Know About Its Heavy Themes
by Alessia Santoro 1 week ago

Awkwafina
See the New Teaser For Disney's First Movie of 2021, Raya and the Last Dragon
by Alessia Santoro 6 days ago

Holiday For Kids
A Charlie Brown Christmas Isn't Airing on Cable This Year; Here's How to Watch
by Murphy Moroney 5 days ago

Miley Cyrus
Every Cover From Miley Cyrus's Backyard Sessions Was So Good, We Can't Pick a Favorite
by Kelsie Gibson 1 week ago