With two little girls running around her Brooklyn home, Maggie Gyllenhaal is very familiar with the ubiquitous Johnson & Johnson First Aid Kit. The kit, which is celebrating its 125th anniversary this year, has come to the rescue of everyone from railroad workers (its original intended audience) to soccer moms over the past century. To celebrate the milestone anniversary, the star of the upcoming White House Down and mom to daughters Ramona, 6, and Gloria, 1, joined with Johnson & Johnson "Everyday Care" campaign to provide first aid safety information to families in need through Safe Kids Worldwide. The campaign — which consumers can support by creating their own custom First Aid Kits at CVS stores — will create five Sports Safety Clinic Kids' Zones across the country that educate kids about proper hydration and preventing sports injuries. 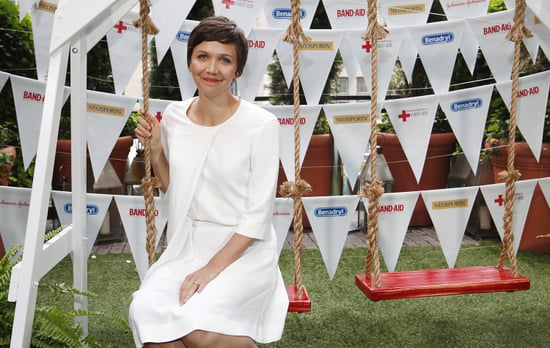 Though Maggie told us that she's been relatively lucky in the accident department so far, she knows the power of a Band-Aid to help a child, both physically and emotionally. "Sometimes though, I feel like they do want some attention and there is not much you can do," she said. "So to put on a Band-Aid [works]!"

Here are some more highlights from our conversation:

Maggie on her involvement with Johnson & Johnson: You just take for granted that there are first aid kits everywhere you go, and that there are Band-Aids and Neosporin. They are there when you need them, so it just seemed like a good fit.

Maggie on balancing her career and family: There was a project that I was thinking of doing that was in New York and it was OK, and then there is this thing I am going to do which is in London and it is fantastic. But, they worked it out for me that I can get her back to start second grade. What it took was me just saying, “Look, I really want to do this but I am a mother and I don’t want her to start a week late.” Because if you think about it from the perspective of a second grader, it is a huge deal. So I think that her dad [Maggie is married to Peter Sarsgaard] will probably take her back three or four days before me and then I will get back a few days before school starts and it will be fine. But I know my husband won't be able to clear all of her old stuff out of her room so we have to do that before we leave for London. [We will] get some new clothes for her for school in London — my husband he can do a lot of things, but he can’t do that!

Maggie on her girls understanding the celebrity factor: Ramona . . . has been doing this interesting thing. I will be with my kids and people will say, “Can you take a picture with me?” And I will say, "No, because I’m with my kids and I don’t want to ask my children to wait for you, you are a grown-up." But Ramona started doing this funny thing where she says, "Yeah, yeah you can!" I think she is joking me, like, "You can’t get out of it if I say it!" If someone comes up to me and I start to smile, she’ll say, "That’s a fake laugh!"

Keep reading for more of Maggie's thoughts on juggling acting and motherhood, traveling with her girls, and what it's like working with Channing Tatum.

Maggie on keeping some normalcy in her girls' lives: I try to keep a constant for [Ramona], so we had been talking about putting her in school in London this Fall — she's going to be in second grade. She is a person, and she made it really clear to me how deeply she didn’t want to do that. There are times when you say, this is what is going to be right for you and you don’t necessarily know, but I had to listen to her. She was so upset by the idea that we didn’t do it and so I guess it does feel important to me to keep her in her routine.

Maggie on the hardest part of being an actress and a mother: I took them both to Ireland on vacation during the Winter and it was a mistake. I really like the movie [the upcoming Frank] and I think it will be good, but as a mother it was a mistake . . . it was too much. My husband said he would be there, but then he is an actor too, and he had to go do this and that. He was gone for three weeks out of five. They were both sick in a foreign county, in a hotel. I shouldn’t have done it. Then the challenge is how to learn from that, how to not make the same mistake again, how to set it up so that it is good for all of us. The thing I find most difficult about being an actress and having children is the travel.

Maggie on what she keeps in her bag for her kids: I always do have a couple of Band-Aids and Neosporin. I have Chapstick — [Ramona] always used to need Chapstick. But then, for the baby, you need so many things. I have Camilia, the teething stuff, which I find really works. Those necklaces really work! Have you ever tried those? I didn't use them on my first daughter. They are like a Russian grandma thing and I actually am Russian on one side . . . they heat up on your body and then amber is a natural analgesic, it's like a painkiller, and an anti-inflammatory, and I really think it makes a major difference.

Maggie on traveling with kids: I just traveled with two alone, totally alone for the first time to LA and then back from LA. I was so proud! Bring a stroller even if you are not sure that your kids will sit in it, because you can use it to put all the bags on and then just wear the baby. I think maybe also, if you are traveling alone with a baby, I think you can go with the first class to get on the airplane so you don’t have to wait in line and you have a second to put your stuff up. I always bring lots of food, which is almost entertainment for them.

Maggie on working with Channing Tatum in White House Down: He was really sweet, lovely, and really, really nice. He was adorable. 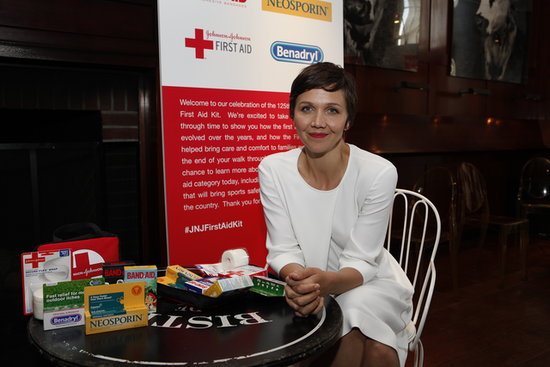 Oscars
Lady Gaga Was Pulled Over by Tiffany's Security After the Oscars . . . on Her Way to Taco Bell
by Perri Konecky 18 hours ago

TV
Mauricio Ochmann Is Set For the Ride of His Lifetime in Pantaya’s New Series R
by Maria G. Valdez 18 hours ago

Camila Cabello
Camila Cabello Detailed Her Battle With OCD and Anxiety: "I Was Embarrassed and Ashamed"
by Perri Konecky 1 day ago

by Alessia Santoro 4 minutes ago

by Tamara Pridgett 14 minutes ago

by Alessia Santoro 54 minutes ago