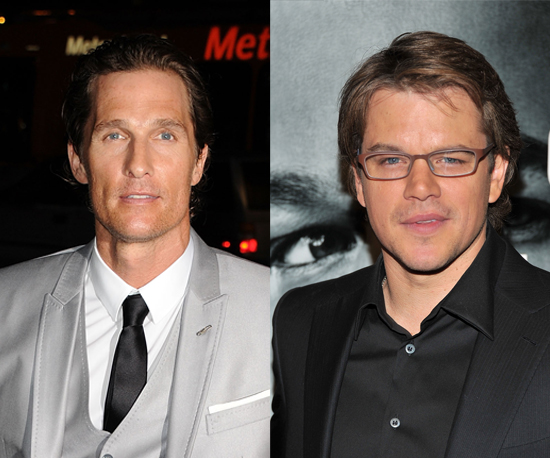 Celebabies aren't the only ones in the spotlight! Famous fathers also like to get in on the Hollywood baby buzz, and nothing says proud papa quite like one gushing about his children during his late-night talk-show rounds! Both Matt Damon and Matthew McConaughey have been doing just that. Think you can pick out which Matt said it? Take the quiz and test your knowledge!

How Well Do You Know Your Matt Daddies?

Which Matt recently said, "Obviously, you stop living as much for 'me' and living for 'we.' Everything I'm doing, my kids are doing with me … Every move I make has to do with them."

Which Matt knows all the Disney princesses because of his kids?

Which Matt recently said, "No job is as important to me as my role as father. Whenever I get the impression that a project is taking me away from my family too much, I get out of it."

Which Matt said his youngest is the "rough and tumble one" of the family?

Which Matt said he "doesn't sleep a lot" because of his young kids?

The Royals
Meghan Markle Contemplated Suicide During Her First Pregnancy, Was Denied Royal Support
by Karenna Meredith 5 hours ago

Celebrity Pregnancies
Meghan Markle and Prince Harry Are Excited to Welcome a Baby Girl This Summer: "It's Amazing"
by Karenna Meredith 7 hours ago

Celebrity Families
Daniel Dae Kim's Sons Are Making Names For Themselves — Learn What They're Up To!
by Amanda Prahl 2 days ago