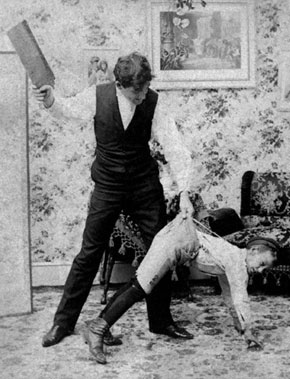 Spanking is a controversial subject. There are those who proudly admit to the old school swat, and there are those who denounce the practice and are quick to point out other ways to discipline children without the physical force. Like a ping-pong ball, the studies keep switching sides claiming one minute it's beneficial for youngsters to be exposed to tough love via swatting and the next minute, a new study says children who have been spanked are better off for it... if it's within a certain time frame. Currently the ball is on the side of the pro-spanking court. A new study says that wee ones who were spanked between ages two and six actually benefited from corporal punishment. The Daily Mail reports:


Young children who are smacked by their parents grow up to be happier and more successful than those who have never been hit, research claims. It found that children who are smacked before the age of six perform better at school when they are teenagers. They are also more likely to do voluntary work and to want to go to university than those who have never been physically disciplined.

While that all sounds dandy for those who rule with a firm hand, the study also says that children who are hit after the age of six were more likely to have behavioral problems. Are you surprised by the latest claims?

Family Life
When a Family Had to Cancel Their Disney Vacation, They Created the Experience at Home
by Murphy Moroney 1 day ago

Family Life
I’m a Working Mom of 3, and These Daily Self-Care Practices Are Helping Me Cope
by Dana Cohn 2 days ago