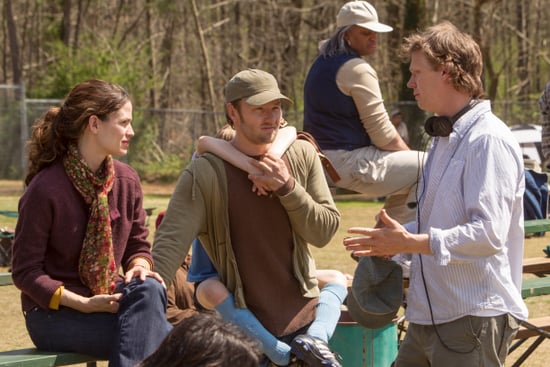 A visit to the set of The Odd Life of Timothy Green must be a lot like entering Peter Hedges's home. The writer and director (What's Eating Gilbert Grape, Dan in Real Life) is known for putting his heart into his films and sitting on his set is likely as comfortable as sitting in his living room. Case in point: after spending some time with the director, Jennifer Garner's first question for me was, did Hedges make me cry. When I said yes, and that he made me cry, she just smiled and nodded.

So it's no surprise that the film, which hits theaters on Aug. 15, is a bit of a tearjerker itself. Hedges took on the Timothy Green project after it was conceived by Ahmet Zappa. He spent two years pouring his life — and bits and pieces of his own insecurities as a father of two boys — into the film, which uses the whimsical tale of a boy who appears at an infertile couple's home out of nowhere to explore the idea of good parenting. When I visited the movie's suburban Atlanta set with two other reporters, we sat down with Hedges to talk about his decision to get involved in this project.

Read on for some of the best quotes and photos from the set visit after the jump.

About the movie being more about the parents than the title character:
Well, everything I write deals with family and home, and when I heard this idea and the premise of the story, I thought here was an opportunity to make a movie about what it means to be a parent. That element of yearning to be a parent and to try and correct your own . . . to give your child what you didn’t get. Sometimes that can backfire, because your intentions are good. The harder I try — the more mistakes I seem to make. Yet it doesn’t seem to work to not make mistakes, to not try. So it's just one of those jobs that — not that parenting is a job — but it's one of those parts of life where you just feel always inadequate . . . the fatal idea behind what’s the good-enough parent. It just seemed like a great chance to explore something that means the most to me in the world, being a father, being a son, being a family.

On identifying with the film:
One of the things that hit me as I was working on the film was, I thought I came to some new awareness of myself as a parent. I thought I was doing a very good job of not bringing my childhood to my kids, and it turned out I was. I brought a lot of that to them and I thought I was out of time [because] my kids are 15 and 17. I started writing this when they were 12 and 14 and I thought I missed my chance. There’s been a number of instances when I've been able to, since I started writing this script, get out of my kids' way and let them become the people they are meant to be and not the people I want them to be.

On why he signed onto this film:
I always try and pick a project I think, in the writing of it, will change me, that I will be different for having written it. So that even if it doesn't work, I can at least look at it, and on a personal level, I'm a different man and a different being because I wrote it. So when I agreed to take the idea and turn it into what it's become, I felt like, oh, this one will make me look at the joys of being a parent and my own personal failures as a parent.

On setting the film in a small town:
You're accountable in a small town. I live in Brooklyn Heights, which is not a small town, but it feels like a small town. Everybody knows everyone, and if I'm misbehaving, if I am overly flirtatious with a waitress, my wife gets a text. But I think it's this: in a big city, there’s unanimity. It's the accountability that’s interesting to me. I wanted to make a movie that gave hope in a challenging time. When I had kids, I thought my kids [were] certainly going to have a better life than I did, because I had a better life then my parents. And I think we are the generation of parents who are going, 'You know what . . . our kids may not.' There’s some really hard stuff coming their way, and it's really nerve-racking.

Harry Shum Jr.
Harry Shum Jr. Is Just Excited as We Are About Crazy Rich Asians 2: "The Love Is There"
by Kelsie Gibson 3 days ago