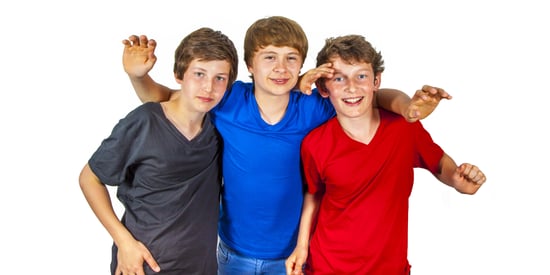 A deeper voice, an extra strong stench, and some serious mood swings. If any of these describe your little boy, then chances are, he's on his way to becoming a young man. As amazing as this is, puberty is an especially difficult time for boys, and you want to get him through with minimal issues. While you may be able to help him through some changes, most of the time, you're merely providing emotional support and some explanations. Still, it's important for both of you to know what's happening to his body and how to get him through these trying times. See what changes your son can expect during puberty, and when to expect them.

Approximate Age to Expect It: 13 years old
Sorry, but the amount of pimples has nothing to do with how much junk food your son eats. Around the age of 13, sweat and oil glands start to develop. When these glands become clogged — usually from not cleaning the skin — pimples pop up on the face and other parts of the body. The best defense against acne is to buy him a face wash that contains salicylic acid. If the zits make him self-conscious, offer to take him to a dermatologist who may provide a more powerful cleaner.

Approximate Age to Expect It: Pubic hair at 10 to 15; facial, arm, and chest hair two years later
Pubic hair is the initial sign that puberty has begun, and occurs around the same time that his testicles begin to grow. Initially the skin reddens and becomes a bit rough, which can cause some discomfort. Two years later, hair will start to show on his face and throughout the body. As far as shaving, be it on his face or further south, it is a choice, depending on his style and comfort. You have no say in whether or not he keeps the scruffy look. You should, however, encourage him to trim armpit hair, as excess strands trap sweat and cause unpleasant body odor.

Check out other changes after the break.

Approximate Age to Expect It: 10 years old
Body odor may be the worst side effect of puberty, especially in boys. The foul scent reaches everything they touch, from clothes to bed sheets. To ward off extra offensive BO, make sure your son showers once a day (twice, if he's active) and invest in a good deodorant. If your son sweats excessively, then consider buying an antiperspirant, which reduces perspiration and blocks the odor that accompanies it.

Approximate Age to Expect It: 11 to 16
Once a lanky little guy, your son will start to fill out as he reaches puberty. That also means developing muscles in some unexpected places, mainly the chest region. Since boys carry small amounts of estrogen in their system, it's common for them to develop what appear to be breasts. As with girls, the development can be painful and a bit embarrassing. Tell him this is common among boys his age (about 50 percent actually) and they will flatten out in a few months. When you're a teen though, a few months feel like years, so be sensitive about the issue. Provide ice packs to ease the pain and purchase some looser fitting tops for temporary coverage.

Approximate Age to Expect It: 11 to 14
One morning, you will wake up to your son saying hello in a deeper and, we'll say it, more masculine voice. While the change occurred overnight, it will be a while before it becomes a permanent one. The growth of vocal cords results in a deeper voice. Since they are adjusting to the lack of space in his larynx, they could create a high-pitched sound if he speaks too fast or swallows air too quickly. Luckily these instances, known as voice cracks, occur sporadically, and his vocal cords will finish growing after a few months. As long as he isn't recording an album, the change won't affect your son too much.

Approximate Age to Expect It: 11 to 14y
Though erections are associated with puberty, most boys experience these even as infants and toddlers. It only becomes noticeable during puberty because this is when the penis fully develops. This, unfortunately, causes panic in both boys and their parents. He may wonder if something is wrong down there, while you may think he's having too many dirty thoughts. It's important for both of you to realize that this is a normal reaction that occurs when the penis fills with blood. Neither of you should be concerned or embarrassed by it. If, however, the erections ever become painful, make sure to take him to the doctor.

Image Source: Shutterstock
Tweens And TeensParentingPubertyBoys
Around The Web