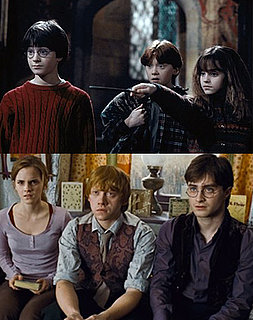 Child actors are known for being precocious; after all, they have to be professional and show up for work while other kids their age are still playing in the sandbox. The characters in the Harry Potter films are no different. Daniel Radcliffe, Emma Watson, and Rupert Grint have been playing Harry, Hermione, and Ron for a full decade — pretty much half their lives.

In honor of the release of the first half of the last installment, Harry Potter and the Deathly Hallows, we've gathered quotes these three have said about living and acting in the spotlight over the years. Take this quiz to see if you know which Harry Potter kid said it!

Which Harry Potter Kid Said It?

"I could be 100 years old and in my rocker, but I'll still be very proud that I was part of the Harry Potter films."

"Every time I come off-set, I am just like a normal kid again."

"In a way, growing up like this with Harry makes it easier to act in each of the films, because I've been through all the stuff that he's going through, like the hormones, relatively recently."

"it feels very strange to feel like you're retiring when you're 20 years old. But it does feel that way. I've spent 10 years making these movies and I just hope that the second part of my life is as incredible as the first half."

"Before I knew there was going to be a film, I was the biggest Harry Potter fan. I read all the books. "

"I've just started school again, and it was a bit strange to start off with; it took me three or four days to get used to it. My friends have been great, they've been treating me normally. "

"This has given me a feeling of confidence, which I might not have had otherwise. "

"My parents help me keep my feet on the ground."

Shirtless
After Seeing These Pictures of Resort to Love's Sinqua Walls, We're Going to Need a Minute
by Grayson Gilcrease 17 hours ago