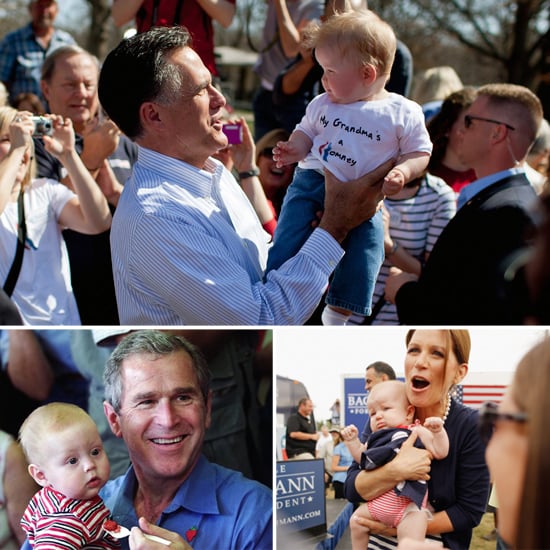 Do you judge your presidential candidates by how they hold babies? Probably not, but that hasn't stopped generations of candidates from reaching for the tiniest rally attendees in their quest for the top job in the land. The earliest recorded campaign-trail baby moment occurred in 1883 when Andrew Jackson was approached by a woman who wanted her baby to see the president. According to the account:

The woman handed the dirty-faced infant to Old Hickory. Jackson took it and held it up before him.

"Ah! There is a fine specimen of American childhood. I think, madam, your boy will make a fine man some day."

Then, with a quick gesture, he put the dirty face of the infant close to the face of Secretary [of War] Eaton, saying quickly and soberly, "Eaton, kiss him?"

Today's politicians are more eager than ever to get their hands on America's youth, frequently crossing barricades to be photographed with the often-terrified tykes. Why? Probably because it softens their image, helps them project a youthful aura, and elicits plenty of oohs and ahhs from onlookers.

As the Republican National Convention kicks off in Tampa, we're taking a look at Republican candidates who weren't afraid to kiss, hold, and feed lil ones along their campaign trails.