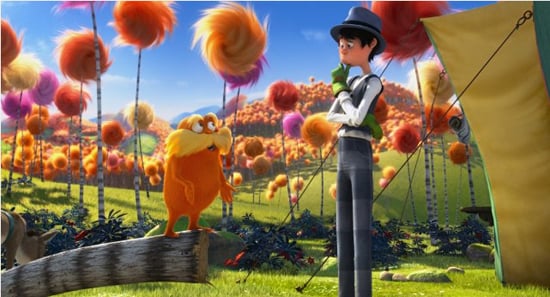 In our family, The Lorax is put on a pedestal. When my firstborn was younger, its rhythmic verses lulled him to sleep, making it a favorite for this tired mama. Now it is part of our weekly rotation, with my son reciting lines from memory as we make our way through Dr. Seuss's tale of overindustrialization and environmentalism. We have a special bond over The Lorax, so there was no question which parent would be taking him to see the film when we both gasped upon first seeing the trailer. The only question was if it would live up to our very high expectations.

A month after seeing the flick, I can honestly say, "Yes" — but with some caveats. As many have noted, the creators of Despicable Me (while working with Audrey Geisel) took some creative license to extend the classic tale into a love story. Ted (now the name of the lil boy from the book, as a nod to Theodor Geisel, who is voiced by Zac Efron) is trying to win the heart of Audrey (a new character voiced by songstress Taylor Swift), whose dream is to see a real-life tree, rather than the fake, robotic versions that currently populate their town. To win her heart, Ted's enthusiastic grandmother (voiced by the always-amazing Betty White) tells him to visit the Once-ler (voiced by an equally charismatic Ed Helms) on the outskirts of town. It is here that the film follows Dr. Seuss's familiar story, while throwing in some new obstacles such as greedy mogul O'Hare (voiced by Rob Riggle) and some song and dance numbers that get the whole town up and moving.

Much bigger and complex than the original story, the film version definitely conveys Dr. Seuss's earth-friendly message, you just have to peel back the layers to get there. As the lil orange Lorax with the big mouth, Danny DeVito makes that message abundantly clear. It just takes a backseat to the love story that is unfolding.

But the big musical numbers (really, they are toe-tappingly great), fun animal characters (the Bar-ba-loot bears are particularly fun), and amazing graphics (the Truffula trees look amazingly soft and cuddly) all come together to create a fun movie experience for kids who know the book and don't want to (or are too young to) know anything about love stories.

As for the 3D experience — I know it is expected in this day and age, but it really isn't necessary. I actually found it more dizzying than enjoyable and would have rather focused on the dialogue than any objects that were seemingly flying my way. But 3D or not, when the Once-ler utters his most famous line — "Unless someone like you cares a whole awful lot, nothing's going to get better. It's not" — it's like a call-to-action for a new generation ready to carry on the environmental mission.

Shirtless
After Seeing These Pictures of Resort to Love's Sinqua Walls, We're Going to Need a Minute
by Grayson Gilcrease 2 hours ago

Margot Robbie
A Hose, a Kiddie Pool, and Other Products The Suicide Squad's Makeup Team Used on Set
by Danielle Jackson 23 hours ago