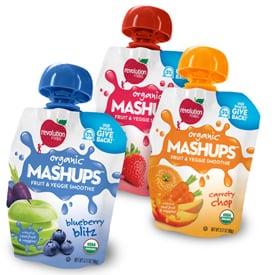 By now, pouches of squeezable organic food have become the norm. What started out as a lighter, more earth-friendly way to transport baby's purees has expanded to a convenience enjoyed by older kids too. For some reason though, once tots graduated beyond stage 2 purees, the sole proprietor of the pouches has been fruit. Taking a page from their baby food siblings at Plum Organics, Revolution Foods is mixing things up and adding vegetables to their popular Mashups line of squeeze pouches. Mashups Fruit & Veggie Smoothies ($5 for four) are certified organic real fruit and veggie blends made without any added sugar. I put the blends to the test with my notoriously veggie-shy son.

Who is this product designed for? According to Revolution Foods, Mashups were created for kids 5 and up who don't want to eat the same squeeze packets as their baby siblings. As with all squeezers, they are designed for families on-the-go – creating a neat way to eat a snack when mama doesn't have time to cut up some fruit and vegetables.

Is it practical? Any mama that's rushed to pack her tot's lunch box and needed to throw some snacks in a bag knows how hard it can be to find wholesome, organic treats that aren't packed with hidden sugar. These packs give mom peace of mind knowing that she's giving her lil ones a healthy snack with the ease of simply reaching into the pantry.

Keep reading to see if my tots liked the packets, and if I'd buy them.

What could be better? It does cost for convenience. At over $1 a pack, the Mashups aren't cheap, but if you consider the cost of fruit, a bag to store it in, and your time cutting it up, it all evens out in the end.

What did the kids think? My son grabbed right for it when the package arrived, declaring that these were for big kids, not babies. He immediate drained a Beetbox Berry announcing that it tasted like strawberry applesauce. It was only after he finished that I told him about the carrot and beets in it, to which he replied, "Then I guess I like beets!" (We'll see if that holds true when I try to serve the whole vegetable to him!) When the big guy wasn't looking, my toddler also enjoyed the Carroty Chop as a mid-afternoon snack.

Would I buy it? Yes, but I'd use them sparingly. Though my kids love fruit, we're still working on vegetables every day. I like the assurance that they're getting their veggie nutrients in these, but I want them to recognize whole fruits and vegetables too. For on the go or after a ball game though, I'm stocking up! 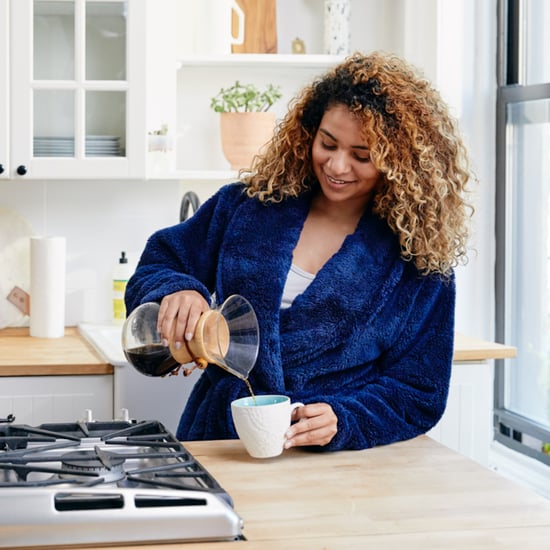 Product Reviews
This Weighted Bathrobe Is Relaxing, Fluffy, and Everything I Need Right Now
by Krista Jones 4 days ago