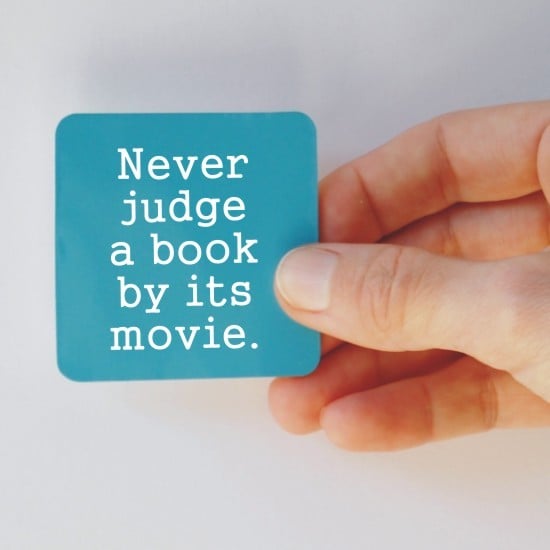 From The Hunger Games to The Perks of Being a Wallflower, a number of movies today are based on popular books. Some moms say there are good reasons to read the book first, while others prefer their child just see the movie. To help you decide whether your teens should only be allowed in the theater after they finish the book, here are four questions to consider.

Is the Book Appropriate?

Since our whole family, including my teen, are prolific readers, we're more often faced with the question, "Is the book appropriate for her to read?" This is the same question that a number of Circle of Moms members found themselves discussing in regard to the Twilight series of books and movies.

Mom Lucy J. says her daughter started reading the Twilight books when she was 13 and now, at 16, has read the entire series and seen all the movies. But many moms say the books are more mature than the movies, and would they rather their teens see the movies than read about sexual relationships, vampires, and romance. Susan B. explains that she prefers it that way because the movies aren't as detailed as the book and her daughter can cover her eyes during parts that make her uncomfortable.

If the Book Isn't Appropriate, Is the Movie?

Personally, that seems a little backward to me. Once your child is at a movie, it's hard to "unsee" it; if she's reading the book and it's too mature for her, she can come to you with questions or put it away until she's ready for it.

Moms like Sheri S. and Roxanne G. say the solution to this dilemma is simple — read the book yourself first and then you can not only decide whether your teen can handle it, but then you can talk to her about it, too.

Can You Use the Book as a Motivator?

Mom Sarah R. has found that telling her teens she won't take them to a new movie until they've read the book provides her teens with motivation to read. She also says it's a good way to get her daughter to read fiction.

Kelly J. says the book-movie connection was the in to getting her teenage son to "put down the game remote" and read. Once he started reading the Twilight series, he started reading everything else he could find about vampires, including The Vampire Diaries and the Thirst series by Christopher Pike.

Will Reading the Book First Bring You Closer?

Sometimes the book-movie connection can bring your and your teenager closer together. Blogger Renee of the blog A Baker's Dozen and Apollo XIV says of her teens: "I love that they are old enough that we can discuss favorite books, I love being able to watch movies with them and get into discussions afterward."

Cindy S. agrees. Her teenage son has read a lot of books on which movies are based. Though she doesn't state her preference as to whether he reads them before seeing the movie, she does point out that she liked that as he read the books they would talk about what was happening in them.

Another Circle of Moms member, Sapphire, says reading the book and then seeing the movie can give you and your child a way to make comparisons between the two. She said when she took her son to see Diary of a Wimpy Kid, they agreed the movie was better because it brought the book to life.

My experience is the same as all of these moms. Some of the more interesting conversations I've had with my teenager recently are ones during which we analyze a movie to see whether it lives up to the book it was based on. (For the record, she says The Hunger Games movie was not as good as the book. I disagree.)

So What's the Review: Book or Movie First?

It seems that moms agree that teens should probably read the book and see the movie, but the order in which they do it is a matter of personal choice. I'm sticking with the "read the book first" stance in our house, but it's important to point out that I usually read the book, too.

That said, if the only way your teenager is going to crack open a book is to see if it lives up to the movie, then it sounds like mom Rebecca N. is on to something when she says she encourages her son to read by taking him to the bookstore to pick out the book version of movies he really liked.

Source: Tumblr
Tweens And TeensParentingKid ShoppingKid Books And Music
Around The Web