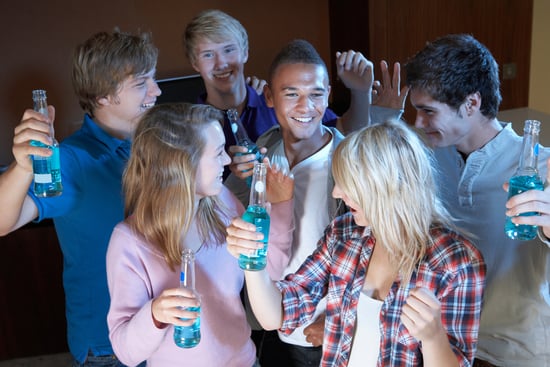 It's not unusual for teens to want to test their limits, but what's a parent to do when that includes consuming alcohol? Circle of Moms member Mary M. says her 15-year-old son wants to go to a party where there will be alcohol present, while Maria M. says her 17-year-old actually wants to host a party with alcohol. If you're faced with a similar decision of whether to let your teen party with alcohol, many Circle of Moms members strongly advise responding with a "no," and offer the following three tips for how to proceed while keeping your cool.

When your child asks you any question about alcohol, including whether she can attend a party where it will be served, Circle of Moms members warn parents to take the comment seriously. After all, even if the question makes you cringe, you want your child to feel like she can be honest and talk to you, mom Vanessa says. "I'm always trying to hit that balance. I want and wanted [my child] to feel they could call me if they get in a tough situation involving alcohol, but at the same time, I didn't want to encourage it."

Cathy B. agrees, saying she's worked hard to maintain a close relationship with her 18-year-old daughter. Instead of having a rash reaction when her daughter brings up a controversial issue, she tries to communicate. "I have found that my daughter is comfortable talking with me about difficult issues because she has been able to talk so freely about light and easy things," she shares. "The result of our open dialogue is that she has been willing to live by house rules."

Similarly Tammy V. recalls when her son asked to attend a beach party last year where alcohol would be served, she didn't allow him to go — but they had a healthy chat about if he ever found himself in a situation where he can't get home because someone has been drinking or he has been drinking, he shouldn't be afraid to call home at any time. When your child isn't afraid of communicating with a parent about a touchy subject, "that reduces the risks of her finding herself in a dangerous predicament," Tammy says.

When you're chatting with your child, it's important to go over any ground rules. In Cathy's house, that includes absolutely no underage drinking, and if her 18-year-old daughter finds herself at a party where alcohol available, she has to leave the party immediately, and Cathy picks her up.

Terri R. has also clearly outlined alcohol rules for her kids: "My kids know the penalties for drinking underage: you come home drunk; mom will call the police; you will be fined; you will have to go to court; you will be admitted to a 30-day in-patient program to come home clean," she says. "I've talked to my kids constantly about the dangers of drinking at an early age. Quite simply, teenagers are not mentally, physically, or emotionally ready to cope with the consequences of alcohol. Teenagers aren't the best at making good decisions — add alcohol, and you've got a recipe for disaster."

In addition to house rules, there also are government restrictions parents should review with their teens. For instance, in the United States, it's against the law to serve minors any kind of alcohol no matter what the situation. "Allowing your child to attend a party where the adults there are serving it or allowing it is a big no-no," Evelyn W. says. "If the police are called, they can get arrested for this and spend time in jail over it or get heavy fines. If a child that is under the influence leaves and their parents find out that this was a booze party and did not know beforehand, those people are liable for allowing the drinking. The parents of said child could sue."

Realistically, moms like Eunice M. say that moms need to be cognizant of the fact that teens will likely be exposed to alcohol, but that's its important regardless not to condone it. "Realistically, our teenagers will find alcohol on their own somewhere, but I would never condone a party, and if my daughter said, 'no one will come then,' well, I guess she won't be having a party."

If your teen balks at not being able to drink alcohol when his friends are, remind yourself that you're a parent, not another teenager, Circle of Moms members say. "Don't try to be her best friend; stand up and be her mother," Sharon M. says, noting parents often have to show their love by using a little stringent discipline.

Kristi C. says the same sentiments apply when your teen wants to take alcohol to someone else's party. "Sending your child off to a BYOB party under the premise that we have to let them experience life to the best of their abilities, and as long as we trust them and text them, everything will be fine, is just a way of justifying being a friend or the 'cool' parent, instead of being the adult parent who does the safe, legal, responsible, not-so-cool thing," she says.

And trying to be "cool" by letting your child drink alcohol can have the reverse effect. Yvonne C., in fact, says she lost respect for her mom when she caved in and allowed her to drink underage. "She wanted to be the cool mom; it's really not cool. Our kids look for guidance. They may not always follow it, but believe me, it is always in the back of their minds. Stay true to what your expectations of his behavior are."

Ultimately, most Circle of Moms members agree that there are just too many risks in allowing your teen to drink underage and party with alcohol. Your child could get hurt, or inadvertently hurt others, says Kristi C. "I'd be the one responsible for whatever happened if she caused an accident, at least morally, and I would not be OK with that," she concludes.

There's the risk of fines or jail time if law enforcement finds out, and even if you trust your own child, you don't know what or how much your child will drink, Jen D. says, especially at a BYOB party: "You might know what he/she brought, but that doesn't mean he's not sharing what someone else brought along. It also doesn't mean that your child will not be giving what he brought to friends whose parents don't know they're out drinking at all." If your child is underage, then allowing her to drink alcohol prematurely is just irresponsible, she concludes.

Pregnancy
Can You Safely Use Stretch-Mark Creams During Pregnancy? Here's What Doctors Say
by Lauren Manaker 3 days ago

Family Life
I Have a PhD in Education, but I'm Failing My Kids' Kindergarten Class
by Chelsey Hauge- Zavaleta 6 days ago