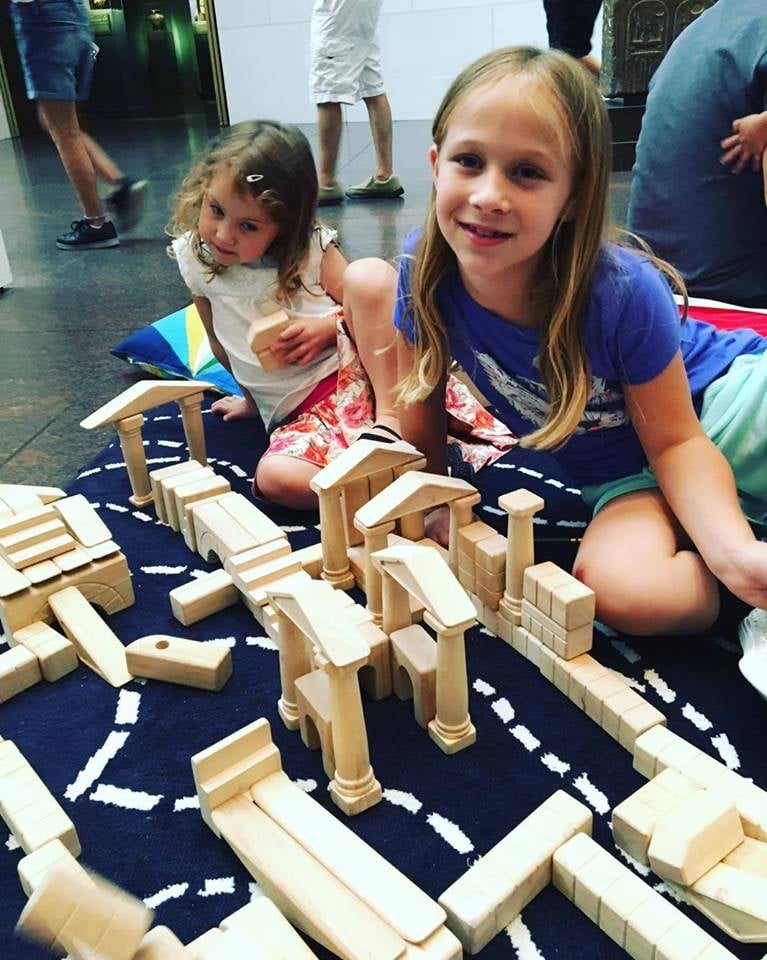 Over the weekend, Molly England wanted to do something special for her three kids. She decided to get them out of their "suburban boredom" and make the hour drive to the Museum of Fine Arts in Houston.

"We were quickly growing weary of the long, hot days, and it was time to inject some culture and structured activities into our carefree Summer," Molly wrote on Facebook. "There was a special interactive exhibit that I knew the kids would love, and every Sunday the museum has family zone, which is always a great."

Taking three kids under 7 years old to a museum, alone, can be a daunting task but Molly was pleasantly surprised with how well the day was going. "Their imaginations were running wild, and my heart filled with joy and pride," Molly wrote. "I felt like a great mom, like a competent mom able to enrich my kids' lives by exposing them to the arts. I felt proud of their ability to act appropriately in such a demanding atmosphere. An atmosphere that requires them to speak softly, not touch anything, and move with grace and awareness — all behaviors they don't do at home."

By early evening, Molly could tell that it was getting close to "meltdown time" because her toddler had skipped her nap but her eldest begged to stay and explore the museum just for a bit longer. "Although I knew we should go, I couldn't resist her plea to stay. I decided we'd go to the museum cafe for a snack and then continue exploring the museum," she wrote. "And this is where my blissful mommying moment ended."

Related:
During Both of Her Kids' Public Meltdowns, 1 Stranger's Quick Thinking Saved the Day

Molly and her family went outside to eat a few treats that she ordered to share and noticed that there were two other sets of ladies dining at the other end of the outdoor patio. This is when things quickly turned sour:

My 3-year-old refused to use a spoon to eat her lemon tart. Opting to use her unreliable, sticky fingers, she quickly dropped the tart on the floor and sobbed. Not a deep, low, sob, but a shrill sob. Even over the gush of the fountain, her crying pierced the other patrons' ears. I had a choice at this point: with another half a lemon tart on my plate, I could've appeased her and given it to her. But I chose to stand my ground. After all, I'd repeatedly warned her it would fall. The tantrum escalated.

Molly's 7-year-old pointed out that people were staring and after a few more minutes of trying to reason with her toddler, Molly gave up. She picked up her screaming toddler as her other two trailed behind, and passed one of the older women who had been sitting outside. "She looked me in the eye and said, 'Oh, thank G-d you're leaving.' I moved past her and then paused," Molly wrote. "I doubled back, looked into her cold eyes, and then I looked at her friend as she shook her head. I looked back at her and quavered with rage, 'Are you kidding me?!' She simply replied, 'No, I'm glad you're leaving.'"

Shocked, Molly rushed off and drove home in silence. But Molly knew that her older kids were aware of the stranger's rudeness and that it was directed towards their mom. "As much as I wanted to tell them how nasty the woman was, I knew I had to use this as a teaching opportunity," Molly told Babble. "We talked about why that lady may have said that to us."

She still went to bed that night feeling guilty and thinking that maybe the stranger was right. "Who was I to think we could infiltrate the pristine museum environment," she wrote. "My unruly kids belonged back home where they were safe to throw tantrums without fear of judgment from strangers — back home where I could avoid the harsh gaze of people who think they know better than me."

However, the next morning she woke up with a fresh perspective and an entirely different perspective:

The good part of the day was real. And if we'd never piled into the car for the long haul downtown, then we'd never have experienced the unique exhibit. We wouldn't have interacted with art and explored ancient Egypt.

The hostility from one stranger won't stop me from trying to parent. They say doctors "practice" medicine — well I practice parenting. I'm not perfect, and that's how I learn. I don't regret addressing the lady because I do think she was out of line. I also think we probably should have left after the Egyptian exhibit when my mom meltdown radar told me we should leave.

I may have only shared the good moments in photos and videos, and that's because they were valuable moments that I want to remember. The disapproving stranger will not take that away from me.