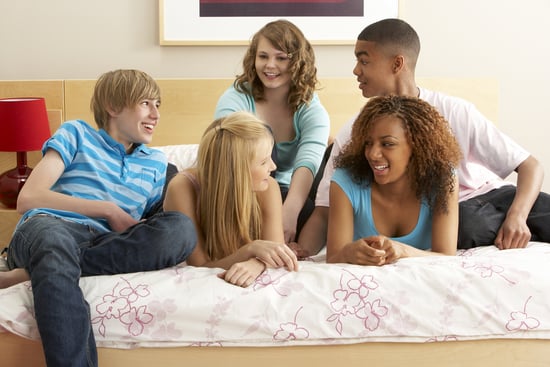 I can mark my children's stages in life by their birthday parties. When they were little, there was the themed Thomas the Tank Engine bash, and then came Chuck E. Cheese. That was followed by my daughter's tween spa night.

But the most memorable party was the post-homecoming gathering. My 14-year-old son and an entourage of boys and girl dates for the dance arrived at my house, armed with pillows and toting carry-on luggage.

My son, who was ushering the teens (earlier described as "a few football players crashing on the couch") past me and into the basement like a fleet of midshipmen, called back to me: "No worries mom, their parents said it's cool to sleep over."

Call me Tiger Mom, but I promptly put the kibosh on the sleepover, instructing the partygoers to have their parents pick them up at midnight.

Maybe it was the Dr. Phil episode where McGraw screams at parents of teens to rip the door off the bedroom when coeds are hanging out in the room. Or it could have been nightmare memories of my daughter's same-sex slumber party, held during her freshman year in high school. I said goodnight to the girls watching movies with popcorn and Cokes, and woke up with one puking all over my hallway. They'd spiked the drinks with rum.

Many parents maintain that if you set rules; forbid alcohol and sex; take away keys, purses, and water bottles; and stay up all night doing random patrols with a flashlight, nothing will go wrong. But I don't care if the kids are straight-A students who are headed for the Peace Corps, we all need to remind ourselves that they are teenagers and they do what teenagers do best: test the water.

I worry about the alcohol consumption and the liability issues. But more significantly, I am concerned about the message it sends to my daughter if I condone a group of 16-year-old boys sleeping in my basement with her and her friends. What's next? Private sleepovers with a boyfriend in her room?