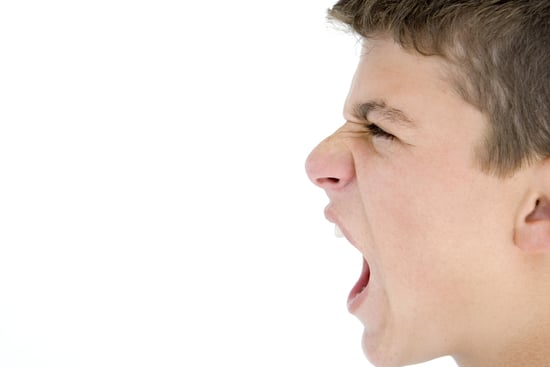 Toddlers aren't the only children who have tantrums! Teenagers often throw their own angry tantrums, resorting to foot-stomping, door-slamming, yelling, and more. If you're looking for ideas on how to respond to your teen's emotional outbursts, here are five key steps Circle of Moms members suggest.

In the face of a teen's explosions, it's important for moms to keep their temper and not engage, say Circle of Moms members like Audry C. "Just stay calm and always reassure her that you love her at all time," she says. Andrea C. adds: "Remember who is the adult, shouting won't help, time out does, when you say go to your room and come back when you feel better or are ready to chat."

Similarly, Bernadette M. says she calms the situation by sending her teen to her room. "Tell her if she wants to be treated like a 2-year-old you have no problem with that either, if she sees you get upset at all then she won, and won't learn, they need to own the consequences to their actions," she says.

Arguing and refusing to follow rules are certainly challenges with the junior and high school set. But when the behavior escalates to kicking in doors or punching walls, Circle of Moms members agree that parents should quickly enforce consequences to calm the outburst.

One consequence several moms recommend is to remove the child's door. Dana G. reports that this approach worked in her family: "When my teenage stepdaughter did this, all it took was a couple threats to remove her door. With her older brother, we actually did remove the door for a while. Since she knew we would follow through on the threat, the door slamming stopped."

Other moms suggest parents find something to take away when teen tempers start flaring. Ann, for example, shares that locking down the cell phone and computer works when her 12-year-old daughter starts throwing fits. "I have tried parenting with logic such as explaining to her why she should not be talking back," she says, and admits that it was unsuccessful. "This does not work for me." When tempers remained high, she said: "I am now punishing her by taking away her cell phone and not allowing her on the computer to converse with her friends. This seems to be working."

Sara N. says she warned both her teen daughters that action would be taken if they continued to have temper tantrums. "I have found that threats work if you issue an ultimatum and follow through that way they know the boundaries," she says. "Too many threats with no follow through and the kids learn the game they know how far you can be pushed and then they control the situation. I'm the parent and I'm in charge."

She says she gives her 14-year-old daughter the choice to act appropriately or warns: "If she is acting like two, I treat her like she is two." That means following through with punishments that include making her go to bed at 6 p.m., like a 2-year-old would. "If she is upsetting the family I tell her to go to her room, strip her room of her stuff so there is only bed and make her earn it back it."

There's nothing like staying active to stave off angry behavior, say moms like Wendy L., who suggests teaching teens to channel anger into productive avenues like work, exercise, or sports. "We make our teens walk up and down the stairs five times to burn off their anger," she says. "For every time after that it would increase by five more trips up and down the stairs until they were so tired from it they didn't want to do it anymore."

If the fits of explosive anger happen regularly, it might be a good idea to get professional help to find ways to cope with their anger, says Grace C. "It got so bad that I decided to send him [her 13-year-old son] for counseling," she says. "It really helped him feel better about himself and I noticed a reduction in his anger. I would say don't be afraid to have her talk to someone who can listen non-judgmentally."