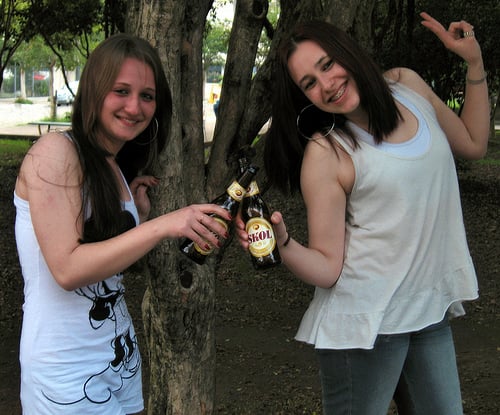 How your toddler handles herself in playgroups could indicate whether she'll be tempted to drink alcohol as a teen, a new study suggests.

Research reveals that if your child demonstrates a degree of emotional instability and high sociability before first grade, that extroversion and "sensation-seeking" personality means they will be more likely than other kids to drink as teens, LiveScience via the journal Alcoholism: Clinical and Experimental Research reports.

"This underscores the fact that drinking during adolescence is largely a social phenomenon," says Danielle Dick, a psychologist from Virginia Commonwealth University and a coauthor of the study.

For the study, researchers tracked thousands of newborns in South West England from birth until they were past 15 years old. But not everyone agrees with the research.

"While I think the most important finding concerns tracing personality differences back to preschool differences in temperament, we cannot, from these findings, predict with much accuracy which preschoolers will have problems with alcohol as adolescents and which will not," contends Matt McGue, a professor of psychology at the University of Minnesota who was not involved in the research.

Source: Fernando Ariotti via Flickr/Creative Commons
Tweens And TeensToddlersParentingThe Scoop
Around The Web