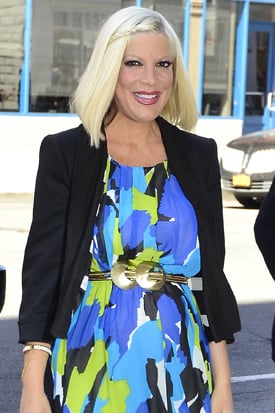 You may want to call her the mother of reinvention. In the public eye since she was a teenager starring her dad's hit teenage soap opera, Beverly Hills, 90210, Tori Spelling has more recently been known as an innkeeper, a reality star, a best-selling author, a boutique owner, and a jewelry designer. But the role that's giving her the most attention these days is mom. Currently pregnant with her fourth child — who was conceived just one month after Tori gave birth to daughter Hattie in October (the family includes son Liam, 5, and daughter Stella, 3) — and due in September, the busy mama is taking all of her roles in stride.

At a party celebrating the release of her first party planning book, celebraTORI, at NYC's craft shop Make Meaning yesterday, we laughed as Tori revealed that her current pregnancy was a bit of a shock. She said, "All my friends keep asking me that: 'Was it planned?' Seriously, Hattie was 1 month old. Do you think it was planned? I was up all night with feedings. I don't know how he got that . . . to make this [pointing at her baby bump]!"

We sat down with Tori to talk about one of her favorite subjects, party planning, and how this pregnancy compares with her previous ones.

LilSugar: You are known for going all out for your kids’ birthday parties. How much input do you allow them to have?
Tori Spelling: They plan the whole party with me. I have always vowed not to be that person that was like, "Oh, you want that, oh, gosh, ugh, no, that’s not going to be very chic." We just had [Liam's] SpongeBob party. He said, "I want SpongeBob," and I was like, "OK, great" [rolling her eyes], then I was like, "Well, that's cool. I can make mini-sliders and call them krabby patties. I can make these big jellyfish and fish," and I was going on and on. I [said], "OK, hold it . . . Liam, what do you want?" He looked at me and said, "Mom, I just want a piñata." I was like, "Keep it simple, stupid. What are you doing? The kid wants a piñata." And it's true, we need some cute little things at the party, but he was all about the piñata. It’s not my call — whatever they want, they get . . . within reason! I mean, budgetary reason!

LS: So Hattie’s first birthday is going to sneak up on you right around the baby’s birth! Have you thought about her party at all?
TS: Yes, for sure! I have not thought about the theme, but I have thought about what I should do. Should I plan the party before I give birth? Because am I going to be freaking out! The baby is going to be born roughly a month before her birthday. I’m going to be walking around with a newborn at my 1-year-old’s birthday party! Crazy town! She loves to dance, so that did cross my mind. When she hears music, she goes nuts! I mean, her version of dance is like jump, jump, jump! Maybe we will have Hattie’s dance party.

LS: What was your favorite party as a child?
TS: Oh, my gosh, I think it was my 8th birthday party. That's the one I talk about in the book. That’s when I got my first opportunity to plan. It was a roller-skating party, so that was really cool. My mom let me pick out my outfit, and I totally looked like I was in the movie Grease. I had the spandex, hot pink leggings or whatever they are — they are now sold at American Apparel, but when we were younger, they were hot! I had a tube top and a little tied shirt that said "Tori" in rhinestones, white roller skates with neon pink laces, and hair out to here with little clips . . . It was awesome!

Keep reading to see how Tori Spelling and Dean McDermott told the kids they were expecting again, and her favorite baby shower idea!

LS: How's the pregnancy going?
TS: Really well! I've got to tell you, the first three — that sounds so bizarre to me still — I was sick as a dog the first trimester with horrible morning, noon, and night sickness, and exhausted the whole time. This one’s been great! It's been really great! Maybe I didn’t have any time, so my body thought, "I’m still pregnant!" It didn’t have time to start a new one, so I psyched my body out!

LS: It's baby shower month on LilSugar. Are there any baby showers in the book or have you thrown any that you are really proud of?
TS: I don’t go into it in the book, but it was a strategic move on my part. I’m hoping to do an all-kids-and-baby party book, so fingers crossed if this goes well . . . ! I did a baby shower for my best friend Jenny that I still think is supercute. We did a sleepover party, so everyone arrived in the morning as if you just woke up at a sleepover and the dress code was pajamas, so she looked supercute!