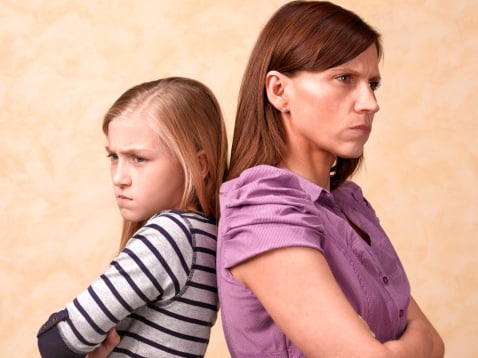 Raising a tween isn't easy. They aren't yet as independent as teenagers (though they want to be) and they're more independent than younger kids. Many preteens deal with this uncertain time with what one Circle of Mom member calls "the Door Slamming-Foot Stamping stage."

Having made it through raising one tween and in the midst of raising another, I had to laugh at the accuracy of this description. The tween attitude is definitely accompanied by door slamming, foot stomping, and — even more infuriating — eye rolling.

It's an attitude that invites battle seemingly out of nowhere. As Michelle V. says of her daughter, "All the simple responsibilities/tasks that she used to help out with or do are now a battle." She wants to know how to deal with this ever-increasing attitude.

Circle of Moms members have great advice on how to empathize with your tween's struggle to be independent of you, and how to let them know what's unacceptable behavior.

1. Stop Doing Everything For Them

Some moms say they've dealt with the battle over chores by stepping back and giving their tweens the independence they're fighting for. In fact, mom Jade H. suggests, "I'd say that you should make her grow up a little by stopping doing her laundry, dishes . . . [and] let her make her bed."

It's a good strategy — show your tween that you trust them enough to get things done and make them live up to the responsibility of it. Things may not get done well or on time, but your child is learning what it means to be independent and has to deal with the consequences if she forgets to do her laundry!

2. Take Away the Door

Of course, there's still the matter of door slamming to deal with. Moms say what they don't have, they can't slam. Member Jalanisalami says she replaced her tween's door with a beaded curtain. It still offers some privacy, but as this mom says, "Slam that!"

As for the foot stomping? Well, it's going to happen, but you can always take a lesson from Dana G.'s family. They don't allow shoes in the house, so stomping isn't nearly as noisy or effective in pushing her buttons.

"When I tell her she is being disrespectful, she acts like she doesn't know what she said wrong, and sometimes I think she is telling the truth," Circle of Moms member Brandy W. says of her daughter. That could be word for word what I figured out about my daughter in her tween years.

One of the problems with dealing with a tween is that they can seem so grown-up that you sometimes forget they're not. What Brandy and I both realized is that tweens are trying on attitude that they see and hear from peers and TV.

They don't always understand that the tone and words aren't appropriate and they aren't always deliberately trying to be rude. You have to tell them what they've said wrong and offer up suggestions of how to say it more respectfully.

4. Remember Tweens and Toddlers Have a Lot in Common

As a mom who has had a toddler and a tween at the same time, I think toddler and tween attitude is very alike. From a growth perspective, it's true, too. A research study from Johns Hopkins University found that tweens undergo a brain-growth spurt that can only be compared to the one seen in infants and toddlers.

So if you think your tween is having toddler-like meltdowns, she really is. Mom Nicola V. adds: "They [also] seem to have similar issues with regards to independence and finding where they fit in the world." It doesn't help you in the moment, but it's information that can help you gain some empathy and perspective on your tween's chaotic mind.

Tweens and Teens
A Mom on Battling Gender Norms While Shoe Shopping With Her Son: "It's About Challenging the Status Quo"
by Murphy Moroney 7 hours ago