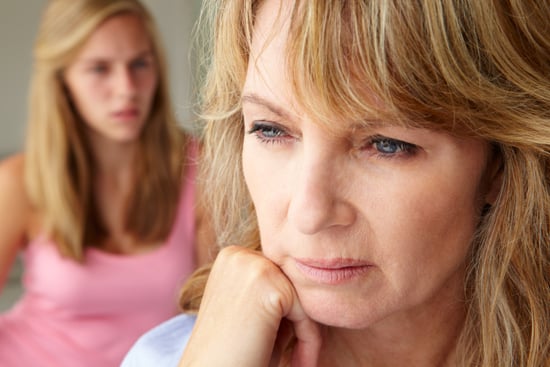 The love between a parent and child is supposed to be unconditional, but it’s not always easy to think loving thoughts when your child says, "I hate you." This is something Shelley C. and Amy R., Circle of Moms members who are both moms of teens, are struggling with. When Shelley's 15-year-old daughter blurts these words out in anger, she wonders what the best response is: "I've been told and have read that I should ignore it, but dang, I find it the ultimate disrespect and I hate letting her get away with it. Believe me, I am exhibiting enormous restraint by not popping back at her with something." Amy seconds that experience, volunteering that coming up with an appropriate response while keeping her own emotions in check is the hardest parenting task she's been faced with.

When your tween or teen similarly tests your limits by saying she hates you, Circle of Moms offer six tips to help you get through it.

Keep reading What to Do When Your Teen Seems to Hate You.

1. Know That It's Normal
Circle of Moms members generally agree that parents shouldn't get too worked up when their kids say they hate them. More often than not, it’s merely a phase that teens will grow out of. "My experience has been that this type of behavior peaks at 15, or when they are sophomores in high school, and by the middle of junior year or a few months after turning 16, they start to get more normal," reassures a mom named Connie S.

Margaret B., whose son began telling her he hated her at age 14, agrees. At that age, teens are seeking independence but are frustrated, she says. Pauline T. attributes it to puberty. When her sons and daughter used hateful language during their teen years, she talked to them about the impact of their hormones: "They have higher highs and lower lows and can go from one to the other in a flash. I told them that even though I understood this, that they needed to know it, too, and [to] remember that what they do or say can be hurtful,” she explains.

2. Keep Your Cool
Because tweens and teens often don’t realize how emotional and hurtful they are being, it’s helpful when parents keep calm instead of reacting in anger. Ignoring the statement actually might help to defuse their anger, says a member named Geneva F.: "They're looking for attention in a negative way, like [they did in] the ‘terrible 2s.'"

Suzanne S. agrees. "Teenagers will say whatever gets the right, or any, reaction. It’s all about testing boundaries." And Connie S. endorses the notion that parents should not get drawn into the confrontation. Instead, she waits until both she and her teen have calmed down. At that point, she broaches how hurtful and disrespectful it is:

"I can't say I always handled the situation gracefully and didn't react, but the times I kept my cool and spoke to [my kids] after the initial drama calmed down, things went much better, and we resolved the issues that caused the drama in the first place,” she shares.

3. Be a Parent, Not a Friend
Several Circle of Moms members respond as moms Hope H. and Rocio O. do. When Hope's 14-year-old daughter slings hateful words her way because she's not "giving in to her every desire," Hope uses the phrase: "I love her enough to let her hate me for a while." She wisely points to the internal struggle at the heart of the issue: "Sure, I would love to be her friend, but as a parent, that's not my [first] job." Rocio agrees, explaining that a parent has the responsibility to make her child productive in life, so it's OK if your child sometimes thinks he hates you in the process.

When Gale I.’s teen says something hateful, she responds similarly, with, "That's OK, because there are times I hate you, too, but I will always unconditionally love you. What I hate is some of the things that you do, like disrespecting, but that's OK because you will find deep down you really love me, but [don’t] know it just now. When things cool down, you will find out you really need me and love me.”

Gale finds that these types of statements end arguments quickly and move the conversation onto whether you’ve given them a reason for hating you and how to heal the relationship. And a member named Tammy B. finds that a comeback like this not only helps a parent keep her cool, but also catches the child off guard. "It isn’t a negative response [and] you’re acknowledging her feelings and not rising to the bait of the fight," she explains.

4. Set the Terms of Respect
One thing parents should not do throughout these conversations is allow their teens to be continually disrespectful, say several Circle of Moms members. Ginger M., in fact, told her children they aren’t allowed to say “I hate you” at all. "I [told them that] I don't deserve that, and we aren't going to say that in this household. I used a normal tone but was assertive," she says.

Similarly, Kimberly G. told her 17- and 18-year-old daughters that "I hate you" is not an acceptable thing to say and grounded them for saying it: "I have great kids. [They're] honor roll students; they don't do drugs, run around, skip school, or hang with bad crowds, but it's because I set very stern rules regarding respect and moral values." Dani R., too, told her son that she does not allow hateful language or behavior in her house, and if she hears it, she takes away his allowance or his Xbox time. "When we have calmed down, I tell him it’s hurtful. ‘If you want to be treated like a grown-up, let’s speak about this in a grown-up manner.’”

Although teenage anger is a phase, it’s important for parents to teach their children to respect and value other members of their family, Mechelle C. says. "Our rule in our house is that each person is treated with respect, and if that does not happen, there is a painful consequence like missing an event, losing the car/phone, etc.,” she says. "What I have been discovering is that my teen treats me that way I allow him to treat me. If I set standards of respect and my expectations are that I am respected by him, I feel empowered when he disrespects me to impose a consequence that signals to him that what he has done is completely inappropriate and wrong."

5. Get to the Root of the Problem
If your child says something hateful, then it’s helpful if parents can get to the root of their anger, Kimberly G. says, noting parents have to listen to their children. "My girls tell me when I do something they don’t like, and sometimes they’re right about it. You have to hear what they say, and even if it’s tough to admit, it doesn’t hurt to let them know that you’re not perfect. They, too, however, need to listen and do the same,” she says.

Asking questions is a good way to find out what’s bothering your teen, Karen says. Is something rooted in her that is making her feel this way? Do you compromise with her? Do you compliment her? Do you praise her? "Everyone deserves and needs to have positive feedback,” she says. So when teens say, "I hate you," parents should sit down and find out what makes them feel that way. “Ask her what the two of you can do to mend your relationship and work on it together. If you involve her in the process of working on your relationship, it will make her feel like her voice is being heard,” she suggests.

Melanie N. agrees that asking questions will help you understand why your child is angry and hateful toward you. “Sometimes, to find out the answers to our questions, we have to pull our emotions out of it and actually listen to what they're saying. You may want to ask probing questions like, ‘Why do you hate me?’ Or, ‘What did I do to make you feel that way?’ It's not going to be easy to hear the answers, but just listening is taking some of the barriers down," she says.

Christy T. says getting to the root of the problem can help to prevent future arguments, as well as help your teen to see that she is being hurtful and that you are human, too. “Usually teenagers say it out of anger because they aren't getting their way with something. I have always told my children, ‘I understand that you are frustrated about (whatever it is), and I'm sorry, but I really wish you could find another way to express your frustration and anger besides telling me that you hate me because I do so much for you, and that really hurts me.'"
6. Lighten Up
If parents can keep a dialogue going with their children throughout the teen years, then they’ll very likely be able to laugh about those "hateful years" once they’ve passed. "When my daughter tells me she hates me, I tell her right back, 'Good, then I must be doing my job as a parent!’ When she rolls her eyes at me and tries to give me that stern look, I just look at her and burst out laughing! I tell her she looks so funny when she's mad! She soon forgets she's mad and gives me that quirky smile!" Wendy L. says. In the same vein, Shelley C. shares that once, after her daughter calmed down, she admitted, "Oh, I never mean it. Sometimes you make me so mad '[I hate you]' is the first thing that pops out of my mouth." Now they're able to laugh over the line “you'll love me later."

Remember, Melanie N. says, "we were all teenagers not too long ago, and it’s important to remember that communication wasn’t what we majored in. It’s not that our teens don’t like us — it’s that they don’t like our discipline, and they have a hard time communicating what exactly the feeling is. [Or] they could just be having a bad day. Kids are fickle without meaning to be and eventually will see that you do what you do out of love."