“If your kids walk in on you and your partner having sex do you tell the truth about what you're doing? Or do you lie? Does their age play a factor in what you decide to tell them?” These questions, from Circle of Moms member Sara D., bring a topic that typically is whispered about in many homes into the open.

Sara confesses that “I’d probably lie,” but many moms report that they’ve gone to great – if not spontaneous – lengths in creative storytelling to avoid having to make the moment into a sexual education class. “It’s certainly a teaching moment, LOL,” adds Sara D. “But I think my husband would lie.”

Let’s face it, you know the day is going to come, that day when your grade school-aged kid marches into your bedroom in the middle of the night. Says Cheryl Z.: "Kids have a sixth sense [about] when their parents are going to have sex. It doesn't matter how deeply he is sleeping or if it is during his morning or afternoon nap or the middle of the night; I swear my son knows when daddy puts the moves on mommy and he does his best to stop it. Last night at 2 am he woke up out of nowhere just as we were starting, even though he had slept soundly all night. He must not want any brother or sisters!”

Several Circle of Moms members suggest having a story ready for the inevitable moment. “I told my four-year old that mommy was giving daddy a big hug before starting the day,” says Carolee Y. “The kids and I always hug throughout the day, so it was plausible that mommy just rolled over and hugged daddy (I think).”

Others say how they handle it depends on the child's age.“In 14 years it has never ever happened to us,” says Sherri C. “However, for teenagers it wouldn't need an explanation. For a toddler I would lie and come up with [something], like 'we were wrestling.'"

Some moms suggest parents just simply pretend nothing happened, even when they are caught smack dab in the middle of the act. When Laura and her hubby were interrupted,” their son never even asked what was going on. So, as many Circle of Moms advise, she just acted as if nothing had happened. “I just handed him the iPad and he went to play a game,” she says, adding a “LOL.” But, if her son were toddler, she says: “I'd lie to a little one. If they already knew what sex was then I assume they'd know what we are doing and wouldn't even ask. So I guess, if they asked, I'd lie. Walking in on mom and dad doing it isn't the ideal time to teach about sex I'd think.”

A few moms who have been caught say they now have taken to escaping to a new locale for sex. With older teen kids and a toddler, Louise G. says she and her husband almost stopped having a sex life after interruptions form their kids became a pattern. They decided to be creative, and started leaving the older kids with a babysitter and heading to a hotel for the weekend every 6-8 weeks - with their toddler! As Louise tells it, "Once she was in bed we would sit with a glass of wine and just chill out. It just helped us reconnect as a couple and gave us something to look forward to.”

Since her kids started catching on to what was going on in the bedroom, Tah D. and her husband have found creative places to “sneak” sex even when their three kids – ages three to 13 – are home. “The kids can be home or not,” she says. “We will go in the bathroom if we have to.”

Other Circle of Moms members feel it is important to simply tell it like it is.  “I would probably tell the truth, or a close approximation of it,” says Denikka G. “My oldest is only two-and-a-half though, so hasn't asked any questions yet, but he has walked in on us a couple times. At this point, we just don't make a big deal out of it. We stop and put him back to bed. In the future, I think honesty is the best policy. I may not tell him all the gory details if he's still really young, but something like ‘mommy and daddy are having special loving time’ or something like that.”

Becky T. agrees: “My daughter is 10 and I think at this point I would be honest with her. When she was smaller we ‘almost’ got caught a few times, but when the door opened, she didn't seem to notice anything strange and didn't ask any questions. I never had to lie to her about it. Now that she's 10 and has a pretty good idea what sex is, and catches on to some (not all, but some) sexual innuendos that people make (which are supposed to be over her head), I think she's old enough to realize the truth. Not to mention Mom's having another baby (any day now) and she's well aware that babies are created from Mom's egg fertilized with Dad's sperm.”

Have you ever been interrupted by your child? 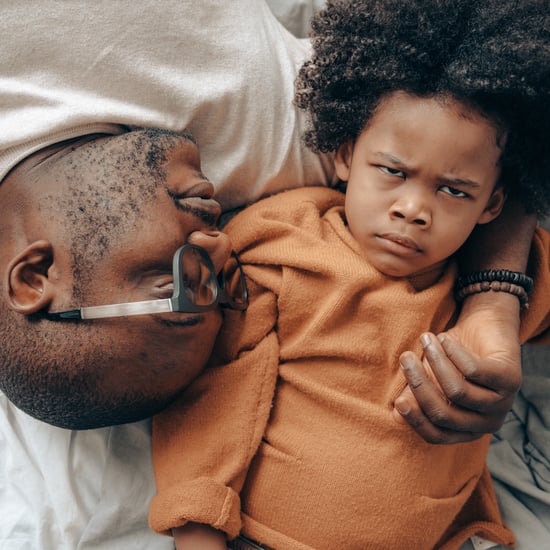 Little Kids
How to Teach Your Kid to Regulate Their Emotions, Straight From a Therapist
by Stephanie Kaufman 3 days ago