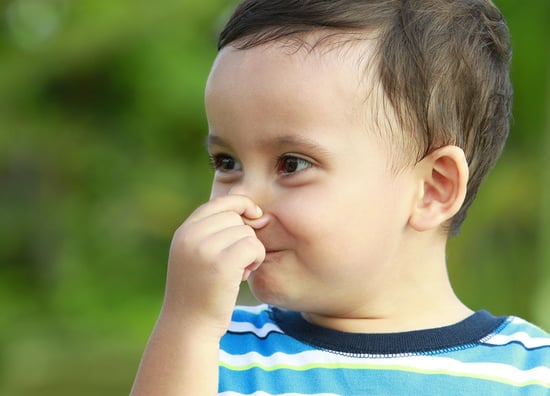 I'm not what you would call a calm mother. As a working mother of a preschooler, a tween with autism, and a teenager, I almost never feel like I'm in the right place doing the right thing at the right time.

My younger two children are boys and are, as boys are wont to be, intrigued by all things scatological. As Circle of Moms member Teresa puts it, "Fart is a daily word in [our] house . . . and a daily action as well."

Let's just say, if it looks like poo, smells like poo, makes a farting sound, or makes a sound that could possibly be interpreted as gas-related, my boys think it's hilarious. They talk about farting, they practice doing it on command, and they want everyone in on the action.

I used to try to stop it, but then I realized that sometimes boys really will be boys and just gave up. As I said, it's been relieving, and in some small way, I think it's brought me closer to my boys.

In responding to a post in which one Circle of Moms member complained about the joy her partner takes in teaching their 4-year-old "toilet humor," mom Sapphire says that her son and husband share that same sense of toilet humor as well.

Although I realize the original poster was looking for advice as to how to curb the enthusiasm in their house, I was struck by Sapphire's choice of words. This was something her son and husband share, something they had in common, something they were able to bond over. I wanted that, too.

There's really nothing fun about being the parent who's constantly trying to keep order or to be the monitor of all behaviors gas-related. Plus, I was missing out on the opportunity to share something funny with my sons.

Mom Amy K. says, "The words fart and poop somehow bring tons of giggles to kids under a certain age," but the truth is they bring giggles to people of all ages. It's a funny sound, the words people use to express it are funny (toot? fluff? bum bubbles?), and the expressions on other people's faces when they decide how to react are funny.

Joining In on the Gassy Giggles

I decided to get in on the gassy giggles. The first time one of my boys let one rip and I didn't say the obligatory, "Say excuse me," they must have thought it was an aberration. So they tried harder. The next time I even chuckled a little bit, which, strangely enough, actually elicited the words "excuse me."

After a while the boys realized all I wanted was for them to remember their manners in public and at the dinner table and they started letting me in on it. I was warned that a "good one" was coming or that I should probably leave the room in a few moments if I didn't want to be gas-bombed.

It's been kind of fun to let loose a little. I'm a little calmer and maybe even a little cooler in my boys' eyes. The other day I even . . . let go in front my boys. I was rewarded with a "That was a GOOD one, Mom." Yep, letting go of farts has been well worth it.

Kamala Harris
Even Kamala Harris Is a Big Fan of This 11-Year-Old's Costume: "She Has My Vote"
by Yerin Kim 5 days ago