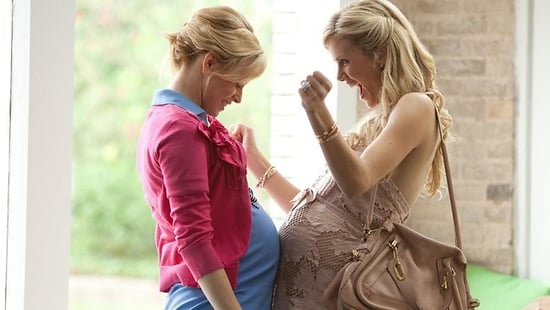 When you're an expectant parent, you're bound to get just as much bad advice as you do good, as soon as you start sporting a bump. "Everyone has a funny story to tell about the lady at the local drugstore who gave some off-the-wall piece of advice on motherhood," says Ashley L. Here. Our moms community shares some of the worst advice they've ever received.

1. How to Play With Your Baby

Lily T. was once told not to play with her kids because they won't learn to play by themselves. But that advice contradicts what Utah State University found after 15 years of research. There is a correlation between early parent-child interactions and later academic achievement. And playing with both Mom and Dad is important, the researchers said, noting that playtime is not only fun, but also helps children to build trust and confidence in their parents.

2. How to Handle Poop-Related Problems

Ashley L. recalls when her 2-month-old daughter was constipated, a nurse told her to put her on a BRAT diet. "I was like, isn't that for babies who have diarrhea?" she says. The BRAT (bananas, rice, applesauce, toast) diet once was recommended for children who had an upset stomach "based on the idea that it gave the gut a chance to rest and reduced the amount of stool produced," according to WebMD.

Nowadays, the American Academy of Pediatrics does not recommend the BRAT diet for acute diarrhea, because it lacks enough nutrition to help a child's gastrointestinal tract recover. Instead, AAP advises that kids resume eating a normal, well-balanced diet — that includes a mix of fruits, vegetables, meat, yogurt, and complex carbohydrates — appropriate for their age — within 24 hours of getting sick.

3. How to Listen to Music

An old woman once told Lisa W. not to listen to music too loudly when pregnant or put a headset near her tummy because it could cause her to lose the baby or even make the baby deaf. If that's true, "I wonder why [people often say] the first thing our child hears is their mother's voice? And why would [stores] sell those products to have a baby listen to music?" she asks.

As it turns out, scientists say the sound-processing parts of a baby's brain become active in the last trimester of pregnancy, and sound carries fairly well through the mother's abdomen. "If you put your hand over your mouth and speak, that's very similar to the situation the fetus is in," cognitive neuroscientist Eino Partanen of the University of Helsinki told the Today show. There's no data on how helpful it is to play music for a baby that's still in the womb. But fetuses can learn certain sounds from their environment during pregnancy and recognize those pitch changes after birth, according to a study published in the Proceedings of the National Academy of Sciences.

4. How to Use Vicks VapoRub

Some people rub Vicks VapoRub on their child's chest when they have bad cold or a congested cough. But Christy W. says someone once told her to put it in her child's nose, not under it, when he had a bad cold. VapoRub is an external oil-based medication recommended for children older than 2 years old and adults and shouldn't be used under or inside the nose, inside the mouth, or swallowed, according to the manufacturer.

"The ingredients in it can get caught up in the lungs and cause all sorts of issues," Christy explains. But "even if you didn't know that, why the hell would you shove it up your kid's nose? It burns!"

5. How to Teach Your Child to Walk

Amy A. recalls she was told that if she didn't put shoes on her kids, they wouldn't learn to walk. "Many people think that if you let a child stay barefoot while learning to walk, they won't be able to do so," she says.

The American Academy of Pediatrics advises that when your child is learning to take her first steps, being barefoot will help her learn to grip the ground with her toes, use her heels for stability, and develop the muscles needed for walking. However, the AAP acknowledges that it may not always be possible for your baby to be barefoot. It suggests shoes be worn to protect your baby's feet when cruising or walking outside or on uneven, hot, or cold surfaces. Shoes, socks, and footed pajamas should have wiggle room and traction to prevent falling and allow proper foot development.

So What's the Best Advice?

As for the best advice they've received, many moms agree with what Leah E.'s mother-in-law told her: "Listen to those who give you advice, but filter out the good from the bad."