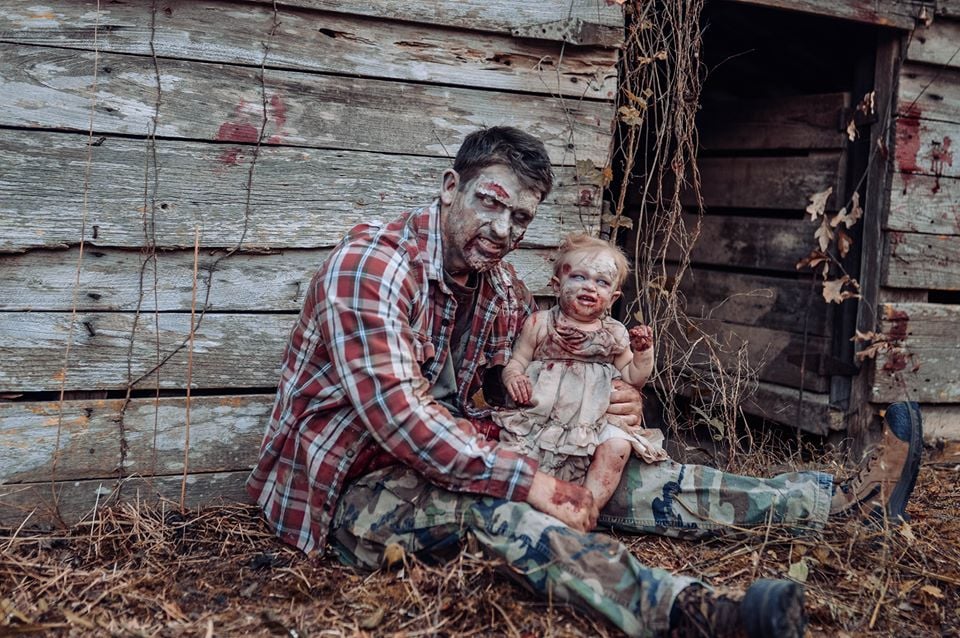 What do you get when you cross zombies from the The Walking Dead with Michael Myers from Halloween? Photographer Tiffany Renfroe's superscary father-daughter photo shoot, which is certainly turning a few heads. Because Tiffany's husband is a huge horror fan, she had the idea to feature him in a zombie photo shoot, knowing he'd love it. The photographer then spent hours shooting and editing the photos, which include the couple's daughter, sharing them just in time for the shoot to go viral before Halloween.

"The inspiration behind the shoot was my husband Daniel and older daughter Kaiden's love for horror movies — specifically the classics — and The Walking Dead," Tiffany told POPSUGAR. "They're counting down until the next season of The Walking Dead is out!"

Related:
Every Alien Fan Will Lose Their Sh*t Looking Through These Scary Maternity Photos

During a trip out to Oregon with her youngest daughter, Oakley, she staged a mom-and-daughter photo session. Once Tiffany returned, Daniel made a crack about how he hadn't had his own full-on photo shoot.

"I wanted to take pictures of just him and Oakley. But I like to be creative, different, and edgy," she said. Because she's an extremely busy full-time labor and delivery nurse, Tiffany knew she had some thinking to do if she wanted to get a Halloween-themed shoot done before the holiday. "Halloween month was in full swing. Daniel was being tagged in multiple Michael Myers posts, and even has a costume he uses to wake the kids up in the morning to be funny," she said. "He wears it to the gym, he makes music videos with it on, so it only made sense to include Michael Myers."

"I loved how good Daniel was at playing dead at the drop of a hat and seeing our three children helping and having fun. The list goes on."

As for the supercreepy shed featured in the photos? The couple simply came across it while cruising around their small hometown of Rehobeth, AL. "We spent a couple days looking for a good location and then we just stumbled upon it," Tiffany said. "It's actually an abandoned pigpen — which makes it even creepier!" Um, yes, I'd say so.

While the results are obviously eye-catching, Tiffany's favorite part of staging the shoot was sneaking in some quality time with her family. "Daniel and I both work full-time jobs, so we value the time we all get together! I also loved all the behind-the-scenes elements that no one sees: the laughing, the mess, the adventure, the snacking, and the kisses," she said. "I loved how good Daniel was at playing dead at the drop of a hat and seeing our three children helping and having fun. The list goes on."

And surprisingly, Tiffany didn't go overboard with insanely creative makeup and colored contacts for Oakley — most of that was done in editing! "The eyes alone required a five-step process on each of them. It took a few hours, but once I would get to the next image, I just couldn't stop," she explained. "I was obsessed with them! I kept going until they were all done."

Keep scrolling to get a look at this creative photo shoot, which includes snaps of one of film's most notorious serial killers "rescuing" the cutest zombie baby we've ever seen. But be warned, some of the pictures are graphic in nature, so make sure there aren't any young kids who might be frightened by them puttering around behind you!