Born on April 21, 2014, Otis is the oldest of Olivia and Jason's two kids. In 2013, Olivia originally announced his due date, May 4, 2014, with a nod to Star Wars Day, but Otis was ready to come early; and Olivia's water actually broke while at Webster Hall in New York City!

On Otis's fourth birthday, Olivia wrote on Instagram: "Four years ago today we were at a @jonbatiste concert at Webster Hall in Manhattan, and this little one decided he wanted to come out and join the dance party. My water broke somewhere up on the balcony. So next time you're there, think of us. (We obviously stayed til the end of the show. Cuz that's how we do.)"

Olivia has mentioned that she plans to raise both of her kids without forcing gender norms on them, but especially emphasizes this for Otis, who she mentioned in 2018 thought of himself as the Disney character Moana. (I mean, who wouldn't want to be Moana?) 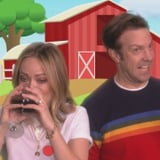 Ed Sheeran
Ed Sheeran Announces Birth of Second Child: "Over the Moon to Be a Family of 4"
by Eden Arielle Gordon 1 hour ago