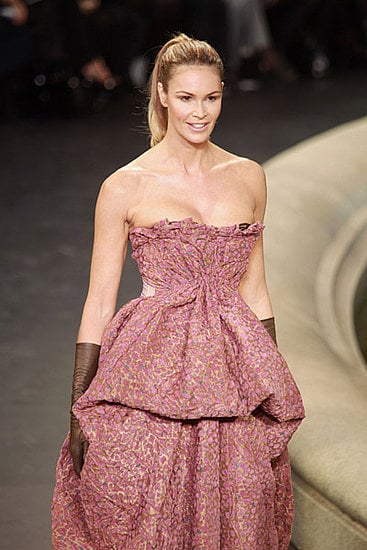 >> Natalia Vodianova was front row yesterday at Louis Vuitton, but it was the cast on the runway for the And God Created Woman-themed show — after the Brigitte Bardot film — who demanded all the attention.  After Miuccia Prada started the "womanly" casting trend this season, Giles and now Vuitton (both styled by Katie Grand) continued the idea.

Marc Jacobs's below-the-knee full skirts and bosom-baring scoopnecks were donned by opener Laetitia Casta, as well as Bar Refaeli, Noemie Lenoir, Lara Stone, and Catherine McNeil.  Karolina Kurkova and Adriana Lima — both fresh off pregnancies — also walked, as did Lily Donaldson in her only show of the season. But the major closer: Elle Macpherson, who reportedly turned down Marc before rethinking and saying yes.

“Designers are always saying they’re going to do a collection for women, but then every girl on the runway (catwalk) is under twenty,” Jacobs said backstage. “I wanted a variety of ages and sizes. We set out to cast gorgeous women, women who feel happy to put their make-up on, get dressed up, get all their accessories.” “It’s a bit old-fashioned, I know, but I think it’s nice for a change.”